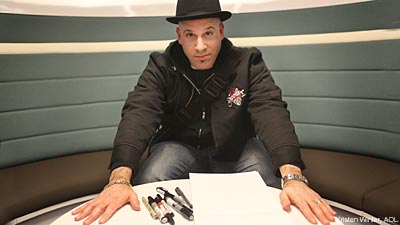 Before he formed Life of Agony in 1989 with vocalist Keith Caputo and guitarist Joey Z, bassist Alan Robert was going to school to be a professional illustrator. Then the band got a record deal and he scrapped his art career for a life of rock 'n' roll.

Robert is still playing with Life of Agony 20 years later -- but he's also returned to his first love. In April, his first of a four-issue comic, 'Alan Robert's Wirehangers,' will come out on IDW. On this week's ''Creep Show,' Robert talks about his passion for art and horror, and how he's combined the two with his comic. He also joins this week's panelists -- Noisecreep editor Seth Werkheiser, head writer Amy Sciarretto, freelancer and Revolver senior writer Jon Wiederhorn and Noisecreep newsman Chris Harris -- to discuss the latest news and the newest album releases.


During the news segment, we addressed Judas Priest's and AC/DC's victories at this year's Grammy Awards, the rescheduling of American Carnage Tour with Slayer, Megadeth and Testament, the return of Ozzfest and Ozzy Osbourne's decision to allow fans to choose the title for his next album (we suggest 'Restless and Wylde-less'). We also talked about Cradle to Grave's singer being rushed to the hospital with the H1N1 virus and the tragic discovery of the corpse of Virginian Metallica fan Morgan Harrington.

Robert also contributed to our album discussion, and this week we had some fine releases including Overkill's thrashy, full-fisted 'Ironbound' and Fear Factory's industrial metal powerfest 'Mechanize,' which features the return of original guitarist Dino Cazares. On top of that, the panel talked about the technical death metal of Arsis' 'Starve For the Devil,' the exotic Israeli prog metal of Orphaned Land's 'The Never Ending Way Of OrwarriOR,' Annotations of An Autopsy's modern death/grind album 'The Reign of Darkness,' German black metal outfit Dark Fortress' 'Ylem' and the crushing debut of Charred Walls of the Damned, the new band featuring Howard Stern staffer Richard Christy (ex-Death, ex-Iced Earth) and ex-Judas Priest singer Tim 'Ripper' Owens.

While the panel does its thing, we put Robert to work sketching a caricature of Werkheiser that gets revealed right before our interview with him. So don't cut out early. It's worth the wait.