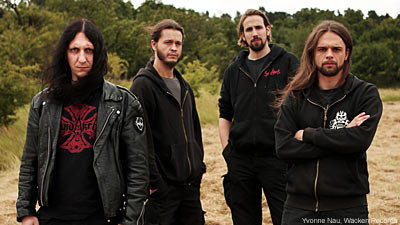 Suidakra. Go ahead. Spell it backwards. We'll wait while you do. OK, Done yet? It's Arkadius, which is essentially just the name of the band's singer and guitarist spelled backwards. Normally, we don't ask band's to expound upon the origins of their name, because that's a trite journalistic question and we'll leave that to the inquiring minds that really want to know. But it was Arkadius who asked us to ask him about the origin of the band's hard-to-spell name -- since everyone else does.

"It is my name backwards," Arkadius told Noisecreep. "It has no deeper meaning! We were drunk one night and came up with it and thought that was cool, like 'Your name spelled backwards sounds like a cool metal name.' It's not an ancient mythological creature, as some might think." Given the band's pagan and folksy roots, it would be a logical assumption. But you know what happens when you assume, right?

Suidakra will return to the U.S. this March to play a handful of shows with Orphaned Land, marking the third time the band is hitting the States, something Arkadius is excitedly looking forward to. "We had a great time in America, and all the people loved our sound and they went crazy and did walls of death and moshing during our set, so we were blown away," he said. "The second time, we made friends and found a lot of new fans, so we are looking forward to this tour, to meet the ones we met last year and to reach new fans. We love to play in America."