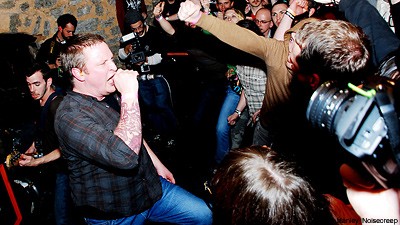 It's like a late '90s hardcore redux with Coalesce and Cave In sharing bills again. Recently announced under the banner of the Scion Metal Show, both bands will be playing free shows in Atlanta and Los Angeles on Oct. 7 and Oct. 8, respectively.

"This whole idea of scion picking up the bill so fans in areas we can't make it to can see us is pretty amazing to us," Coalesce vocalist Sean Ingram told Noisecreep. In August Stephen Brodsky of Cave In said, "It's more likely that we will record before we tour, or even possibly play shows." Thankfully, the possibility of these two shows came up.

The Atlanta show is being held at the Masquerade, the setting for Scion's Rock Fest back in February, which saw Coalesce playing the smallest stage of the festival -- by choice. This time around, Coalesce is playing a larger stage, but Ingram still has his heart set on the smaller stage, saying, "If they would let us we'd play a local VFW hall, we would. Coalesce just works better in a small area we've found out."

Much like fans of both bands, Ingram is hoping to hear certain songs from the older era. "What would be amazing is to hear some of Cave In's 'Until Your Heart Stops' songs on these shows," Ingram says, feeling sensitive to Cave In. "But I'm sure they are in the same boat as we are, having a new record out, too, and wanting to keep moving forward and all. But still, those are some amazing songs."

Ingram does say to expect some older songs from Coalesce at these shows, though. "We've been trying to hit most of our catalog, so the folks that missed us before can hear one or two. I think we got a pretty broad range, so anything retired is just because it's not fun to play live."

To attend either of these shows, be sure to RSVP or plan to listen outside.