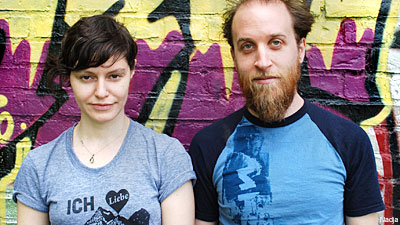 Drone/ambient/shoegazer metal is right up there with black metal on the gloom scale, where walls of feedback are seemingly in a constant battle to out-grim the last. But Aiden Baker and Leah Buckareff of Canadian, drone duo Nadja, are looking to change that with their latest release -- a collection of cover songs entitled 'When I See the Sun Always Shines on TV.'

Aiden told Noisecreep, "This genre, drone metal or whatever you want to call, isn't exactly the most light-hearted of genres, so we wanted to do something a little tongue-in-cheek to show that we do have a sense of humor about ourselves and the music. Also, we wanted to illustrate something of our musical background by choosing artists who were both a direct influence on our sound and those we just liked to listen to."

The majority of bands covered on 'When I See the Sun...' are fairly logical selections. Songs from Codeine, The Cure, Swans, and their slow-it-down-and-turn up-the-fuzz take on My Bloody Valentine's classic 'Only Shallow' show that they have more in common with the aforementioned acts than your typical Earth worshipping drone band. There are a few curve-balls, however. One generally doesn't think of Slayer when they think of drone metal, but Nadja's beautifully haunting version of 'Dead Skin Mask' fits perfectly. "We definitely wanted to cover a Slayer song," Aiden said, "since they've been someone we've listened to for a long time, but are probably not a group one would immediately suspect as an influence on our sound. We actually attempted a version of 'Necrophobic' but it didn't turn out very well, so we tried 'Dead Skin Mask' instead which was more easily adaptable to our sound."

'When I See the Sun Always Shines on TV' is possibly Nadja's most accessible release in their extensive catalog, and would be a good starting point for someone new to Nadja's numbing blankets of noise. Longtime fans, however, will be happy to know that 'When I See...' is just one of four releases from the duo to be released in 2009, which got Noisecreep wondering if they have time for anything else.

"Yes, we both have other projects and interests," said Aiden. "I've published a few books of poetry and have a few other literary projects on the go. Plus I record under my own name and with various other groups. Leah is a bookbinder and is also active within the DIY/craft community. We actually haven't done much recording this year. We're kind of waiting for the backlog of material we have to get released before working on anything new."

Filed Under: nadja
Categories: Interviews
Comments
Leave A Comment
Back To Top