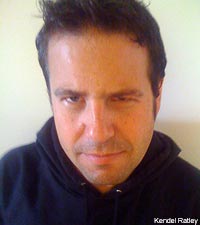 To simply say that former Vice Records' founder and current Blackened Music Series creator Adam Shore is a busy guy is an extreme understatement. Fresh off the heels of his Brutal Truth/Pig Destroyer/Repulsion show at the Brooklyn Masonic Temple this past July -- an ample offering for the Blackened Music Series' elite, growing roster -- Noisecreep sat down with Shore to discuss what else is in store for the series. But in getting the 411 on Sept. 19's Nadja show and Sept. 22's Sunn O)))/Southern Lord showcase, we were also introduced to his musical life in conjunction with Scion.

Shore catches us up to speed, explaining, "I started and ran the Vice Record label for six years ... and we booked a lot of metal events -- especially at South by Southwest. We were already doing all this work with Scion on the dance side, and they were like, 'why don't we try to do a metal show and see how that goes?' So we did a big free show at [South by Southwest] with the Melvins, Boris and Pelican, and it went really well."

From there it was all downhill. Continues Shore, "Scion decided they really wanted to expand everything they were doing in metal, and at this point I do 10 different initiatives with Scion." Of them, perhaps the most instantly legendary is the Scion Rock Fest that took place this past winter at Atlanta's Masquerade. Featuring headliners like Mastodon, Neurosis and spread across four stages in one epic day of doom metal, the free fest hosted an array of up-and-coming and landmark artists, and left fans across the country wanting more -- and Shore intends to deliver, announcing "the next one is Feb. 27, 2010, and at the same venue."

But he said 10 different initiatives, right? "I've got a metal radio show I'm doing on Scion.com called Radio Doom. I'm doing a film project where we're going to make videos for some Southern Lord artists with Scion, and I'm starting to do this string of series where we're commissioning remixes of metal tracks -- we just did a Boris EP where we had a few different dance artists remix Boris. And then we do these show sponsorships where essentially Scion has taken on the role of doing tour support the way labels used to."

Not to mention a slew of free shows sponsored by Scion every other month at the Knitting Factory in Los Angeles -- and soon to be also at the Masquerade in Atlanta as well. "We did Municipal Waste, we're doing Coalesce and Cave-In, we did High on Fire, Brutal Truth, Nachtmystium/ Wolves in the Throne Room and those have been really fun."

But as for the Blackened Music Series in Brooklyn, N.Y., Shore tells Noisecreep how he came up with it, and why it's something he's extremely passionate about. "I've been able to work with a lot of bands I really like a lot in doing all these different projects, and then they would come to New York and they would play BB Kings. I just don't think black metal bands from Norway should play a barbecue restaurant in Times Square. In New York, the venues that book metal always seem [to do] these multi-band bills where I want to go see maybe the fifth band and the first band, but don't necessarily want to see all five bands.

"It's always surprising to me that these really great metal artists play these 30 minute sets -- I just don't think that's the way the music should be appreciated. It kind of reduces everything down and takes away from how great a lot of these artists are, so what I'm trying to do with the Blackened Music Series is give a lot of who I consider the greatest bands in heavy music a real stage, a real production, a real chance to expand their audience."

In closing, Shore asserts, "It might sound silly, but it's just putting on the shows I really want to see. "