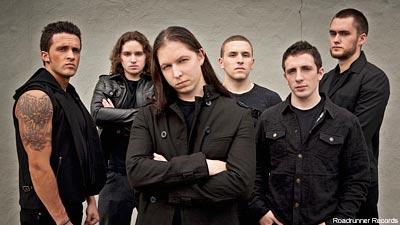 Most of us would think bringing in a new singer from another country -- from England to New Jersey -- would cause some kind of first date awkwardness while trying to making sure there's a connection. But according to Mutiny Within's bassist, this was not the case at all. "He fit right in," Andrew 'A.J.' Jacobs told Noisecreep about when he first met vocalist Chris Clancy in person. "It wasn't like we took years to get to know each other and there were fights. Nothing like that; he was one of the guys right away."

Jacobs wasn't worried about Clancy being anything but the perfect guy for the powerhouse band. He and the rest of Mutiny Within had been working with the man they discovered on YouTube using e-mails and Skype to write songs. "I was feeling it so much through e-mail and everything we had done I thought, 'How could this not be great?'" Jacobs said.

Jacobs admitted to a doing what may have been the second riskiest thing the band had ever done; the first being getting someone they never met to quit their job and move to another country to be in a then unsigned band. "Actually I'm kind of an a--hole," Jacobs laughed, recalling the potential disaster he set up when Clancy met the rest of the band. Jacobs booked the band to play a showcase for Roadrunner Records and potential management two days after Clancy's plane had landed. The band had never played in the same room with Clancy, so the pressure was on.

"So the band practiced so hard," Jacobs recalled. "And when he flew over, we got right to practice. Since we had the music prepared, he came in and it sounded just like we had demoed it."

Jacobs now laughs off that whole decision. "It was such a risky thing. If he didn't do a good job as the singer that day, the people we still work with, such as our management, our record label, they were all there." The band left everyone at the showcase awestruck with their technical, but still melodic, style.

"He hasn't just brought vocals to the band," Jacobs said of Clancy. "He's such a hard worker, and also he's a producer, an engineer and a mixer. He helped us create the 50 demo songs that eventually became the record."

Clancy brought even more than all those things to the band. "He also brought in the perfect second guitar player," Jacobs said. He admitted it was a harder feet to find a solid second guitarist than it was to nail down a vocalist, but when the band had time in between studio sessions and were once again down a member, they asked Clancy if he knew anyone that could be more than just a rhythm guitarist.

Daniel Bage sent the band some videos of him playing Mutiny Within songs, and with that, Clancy's old college friend joined him in America. Just like with Clancy, there was no tension to speak of. Jacobs referred to it as "fate," the way bringing Bage right into the studio went so smoothly. "He even helped us save a couple of songs that we were struggling with, and he just stepped in and wrote."

Download Mutiny Within Songs
Filed Under: Mutiny Within, MutinyWithin
Categories: Interviews
Comments
Leave A Comment
Back To Top