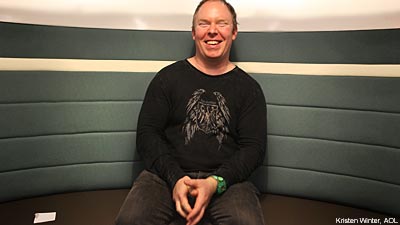 Want to know how Charred Walls of the Damned got their name? Curious to find out just what kind of stupid human trick producer and guitarist Jason Suecof can do with his testicles? Ever wonder what it would be like to be in a band with a singer who conducts Satanic youth group meetings on the side? Then you've come to the right place.

In this week's ''Creep Show' podcast, we sit down with Charred Walls of the Damned drummer Richard Christy and discover all of the above -- as well as finding out how he managed to write and record a full metal album in between working on his daily gig as a funnyman on 'The Howard Stern Show.' We also grill him about what it was like to drum for Death between 1996 and 2001 and what made that band's frontman, Chuck Schuldiner, such a legend.

We also talk about the upcoming Deftones album, 'Diamond Eyes,' which has been scheduled for May release, the possibility that Soundgarden will co-headline this year's Lollapalooza, why Trivium fired Travis Smith and brought in Nick Augusto and reports that Skid Row frontman Sebastian Bach saved Guns N' Roses singer Axl Rose from a knife-wielding maniac.

For our album debate, we gush like a frothing volcano over High on Fire's monumental 'Snakes for the Divine,' cast judgment on Blind Witness' 'Nightmare on Providence Street,' Suffokate's 'No Mercy, No Forgiveness' and offer mixed praise on the self-titled arrival by Mutiny Within.

Check it out or rot forever behind the charred walls of the damned.