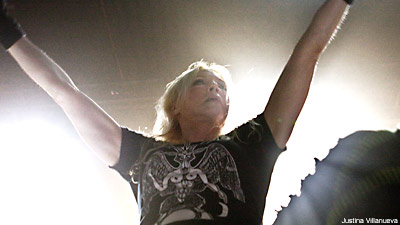 When Arch Enemy played Nokia Theater on Jan. 22, frontwoman Angela Gossow started off the night by telling the crowd how heartwarming it was to see a line of fans waiting outside early in the day, despite having to wake up at 11 AM because of New York City bus regulations.

"I was sitting on the couch backstage, just feeling sorry for myself," she added. I guess an 11 AM wake-up call is pretty rough for a band that constantly tours.

The fight to get as close to the barricade was also rough, as people chanted and cheered for Arch Enemy all night long. For as often as I go to shows, it's pretty rare for this Noisecreep writer to see people get decked out for a concert. But when Arch Enemy is in town, it's that kind of a special occasion. You know, where girls wear open-toe high heels, and the boys wear their classiest Metallica T-shirt under a blazer.

"We always pick the bands we like, not the bands the label tells us to pick," Gossow said in between songs. She then separately thanked every band on the bill: Mutiny Within, Arsis and Exodus -- all of which she called brothers of Arch Enemy.

"We got a new album, which is full of old crap. I really love the old crap." Check out the band's latest release, 'The Root of All Evil.' They also just announced a European tour where they will hit up France, the Netherlands and Belgium.