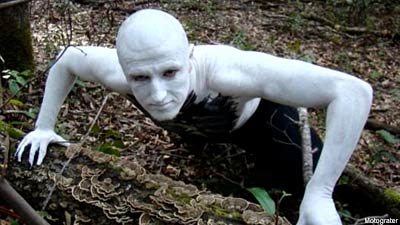 In some ways, Motograter's new frontman Michael 'Angel' Woodruff feels like a character straight out of a movie. He was a longtime Motograter fan before he was tapped to replace vocalist Ivan 'Ghost' Moody.

"It's my favorite band," Woodruff said. "It's been my favorite band since I heard of them. I saw online somewhere the other day that somebody referred to my story as that of the 'Rock Star' movie. That's exactly how I feel. It's a dream come true."

Now, Woodruff is planning on recording an album with his 'favorite' band. The recording process will begin after Motograter's current tour, which wraps up Dec. 20 in Mesa, Ariz. He said the album is shaping up to have a harder sound.

"As you can hear on a lot of the demos that are out there circulating, there's a heavier, more modern sound," the frontman said. "But we're not forgetting about what Motograter started as and where we come from. A lot of the fans are taking to the new demos, but we're also getting a lot of flack for not sounding like Moto, or me trying to sound too much like Ivan.

"I do want to say one thing right away -- Ivan was a great frontman for the band, but this is my band now. I got the job for a reason: I sound similar. I'm not trying to sound like anybody. I'm just doing my job. It used to be his band; he did a great job and went on to bigger and better things for himself. Now it's my turn."

Being a new member to the band, Woodruff said he feels he brings a lot of "new energy and passion" to Motograter. "I love this band," he said. "I've loved it ever since I knew about it. It hits every point of a band that I think a band should have, including theatrics. We bring the visual show; we bring the audio show and we have a lot of energy. We don't just sit there. We bring the show to you--or sometimes on you, if we wipe the paint on you."

The band is best known for its members' painted bodies, as well as the bass-like instrument called the Motograter. It was invented by founding member Bruce Butler, who isn't touring with Motograter but remains involved with the band.

"He invented it in '95," Woodruff said. "Basically, the best way to explain it is as machine-shopped-style made instrument with sprockets used as high pitched cymbals, a machete and industrial-strength cables. It's basically two octaves lower than a bass. It's low. It's gritty. It's dirty. You definitely can tell a difference between the bass and the Moto. We have both now.

"The person that's playing the Motograter right now is going to be a solid member. His name is Mark Nosler. He's an amazing, talented young musician. He has a lot of energy and a lot of great ideas. He brings forth something to the band which is completely an asset. He's sticking with the band for sure."

Motograter purposely keeps the instrument out of pictures, which makes for a big reveal at shows. "It's always been kind of mysterious," said Woodruff, who cites the late Dave Williams, Layne Staley and Lynn Strait among his influences. "There haven't been a lot of pictures are taken of it. Even in the pictures that have been taken, you can't really figure out what the heck it is. It's kind of like its own member. We have all the living, breathing members and then you've got the Motograter, which in its self is its own entity."