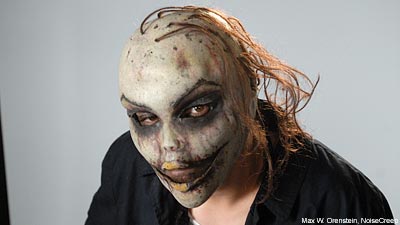 For years, you couldn't mention Mushroomhead without also bringing up Slipknot in the same sentence. Since 1999, the 'Head's had an ongoing beef with the Iowan metallers ... a beef that basically boils down to who did the masks-and-a-ton-of-dudes-in-the-band thing first. Ohio's Mushroomhead first formed in 1993, with Slipknot following two years later. But the question of who bit whose style has lingered, leading to tension between both camps and, in some cases, their fans.

When Mushroomhead's St1tch and Waylon swung by the Noisecreep studios recently, they told us there is no more beef. "It's been 10 years at this point, and we're still here and they're still there. And we still don't sound like each other," says Waylon. "They're not the first masked band, we're not ... no one was. I think there's a Beatles video where they're wearing masks and costumes.

"With music, I've always been into theatrics," Waylon continues. "All of us are big into theatrics. I wish more bands dressed up and did the theatrical thing. People like seeing a show. They like visually being stimulated, and not just like a dude in a Hot Topic T-shirt and tight pants playing guitar that spent five hours on his hair. I'd rather see theatrics, I'd rather see a live action horror movie like right in front of me."

Both Mushroomhead members still think its amusing that bands like Mudvayne and Motograter have never caught hell from the media or Slipknot's fans for wearing masks on stage. And while the beef may be dead, leave it to the 'Head to nevertheless reaffirm their beliefs that they were on the right side of the argument.

"We were doin' it before them," says St1tch. "They just got a deal before we did. And that's pretty much the only story. A lot of the beef just comes from the fans. Rival fans. It's crap, I don't care. Have a good life guys. Who cares?"

Mushroomhead are hard at work on the follow-up to 2006's 'Savior Sorrow.' We asked the band if they'd come up with a title yet for the new studio set, and again, they took a jab at Slipknot.

"One's 'Shark Sausage,'" says St1tch, after which Waylon says, "We wanted to name it 'Ohiowa.' That was a joke."