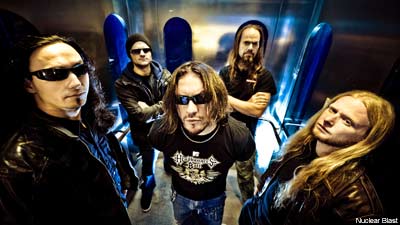 Danish metallers Mnemic have decided to record their forthcoming fourth album, 'Sons of the System,' which is due out via Nuclear Blast in January 2010, in their native Denmark, which marks a return to recording music on home turf! Other than the obvious creature comforts of working while at home, is there anything in that Danish soil that will make this new album a monster?

Guitarist and founding member Mircea Eftemie Gabriel told Noisecreep, "It's basically where we recorded the two first albums, 'Mechanical Spin Phenomena' and 'The Audio Injected Soul.' We were in the cold north of Denmark, and we spent a whole month freezing our asses off in one tiny room in the first AntFarm Studio, sharing everything and concentrating on recording some killer tunes."

The band recorded 2007's 'Passenger' in a much more pleasant locale, however. "For our last album, we recorded in L.A., where it's sunny and the streets were populated by bums and limos," Gabriel said. "I guess we couldn't take the heat on the last album, because we returned to the cold soil of Denmark to record the new stuff. It has definitely contributed to being creative in a different way when writing and it definitely is going to be a five-headed monster this time."