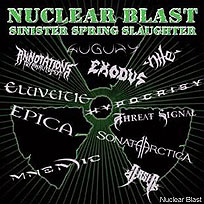 In an era where fans are downloading music off the Internet without paying for it, Nuclear Blast Records and Amazon are teaming up to make downloaders feel less like the criminals they're portrayed to be by the RIAA.

The companies have assembled the 'Sinister Spring Sampler,' a collection of 11 songs by Nuclear Blast artists, and they've put it online. The track list includes a new demo by Exodus and tracks by heavy hitters such as Nile, Hypocrisy, Mnemic, Annotations of an Autopsy and Arsis.

Annotations of an Autopsy -- 'Cryogenica'

Mnemic -- 'Sons of the System'

Nile -- 'Permitting The Noble Dead to Descend to the Underworld'

Threat Signal -- 'Through My Eyes'

Sonata Arctica -- 'Flag in the Ground'