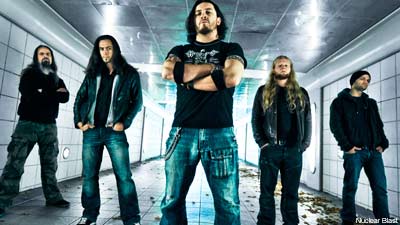 Killer Lyrics: Senses bypassed by this corruption, we're all born in a diesel uterus / This chemical imbalance is telling me there is no end / A digital venom strangling the world.

"'Diesel Uterus' is about how technology is changing our way of living, and how humans change with technology,'" guitarist and keyboardist Mircea Gabriel Eftemie told Noisecreep about Mnemic's track on their forthcoming album, 'Sons of the System.' On the Danish band's MySpace blog, Eftemie goes into some further detail on how "[e]verybody is dependent on digital devices, mobile phones, computers and especially the internet." He asks a timely question: "Is abundance of information a good thing? Definitely good, if you know how to avoid the bad things."

Eftemie, continuing in his conversation with Noisecreep, had plenty to say about the other tracks' lyrics. "Also for the rest of the album, one of the topics that plays well with technology is globalization. The fact that globalization is destroying the world and the fact that outsourcing and mass production are spread to the poorer countries of the world, leaves us only with uniformity."

Instead of presenting a problem and dwelling on the negativity of global socioeconomic affairs, the band went out of their way to offer a general solution. It involves re-industrializing Europe and becoming more self-sufficient instead of perpetuating poverty in other countries through things like outsourcing. "This way," Eftemie explained. "We will get rid of uniformity, and each country will deliver diversity. It's a longer debate, but in the end we all are sons of the system, and it starts with one idea, one vote and one unity to change it all, to make the world better place for all beings. I am a hippietalist in the end ..."

Mnemic has booked shows in Europe for early 2010 to support their 'Sons of the System' release.