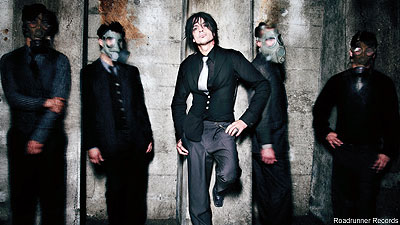 Can anyone really predict what Tommy Lee will venture to do next? When it came time for a new Methods of Mayhem album he, along with producer Scott Humphrey and singer-guitarist J3, opted out of doing what had been done before, boasting the huge gold chain of a hip-hop artist who aided in the songs.

This time around, the core skeletons of each song for 'A Public Disservice Announcement' were recorded and then promptly given to the fans via the web to be re-interpreted or have layers added. 'Fight Song' is a hard driving first taste,with a focus on the heavy, from this worldwide collaboration that takes the ethic of being close to your fans to a new level.

With this premiere Lee offered up another challenge for the fans telling Noisecreep, "I dare you to drive slow, play it on low, do b---- or think you even know."

The Mötley Crüe drummer has stated that this venture away from the kit was far from easy -- seriously how could it have been. For five months, fans listened online and tweaked the frames of the songs. In the end, the track submissions totaled 10,000, and Lee listened to them all, hearing everything from techno layers to hand drum additions.

With all the minds involved in this undertaking, it would be expected to just shrug and say too many were involved to list, but Lee has promised everyone will credit for their part.