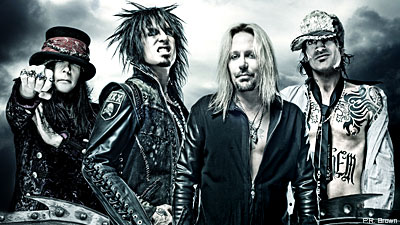 Mötley Crüe are taking a break, but that doesn't mean Tommy Lee is sitting still. "We've been doing the last two summers in a row -- Crüe Fest, which is our festival. We're going to give it a rest in 2010, and then go back into the studio here and make some new music, a new record," says drummer Tommy Lee of Mötley Crüe's immediately future. "In 2011, we'll do Crüe Fest 3. We've been going pretty hard."

While the rest of the guys in Mötley rest or work on other projects, Tommy will transition to both Methods of Mayhem and his DJ work. The latter, he says, comes naturally.

"It's just another one of my passions. I love, love, love to sing and play guitar and play drums. A lot of people say, 'What's he doing? He's DJing a lot these days.' I mean, if you really strip it back, I'm a drummer mostly -- but also a songwriter, and I play a bunch of other instruments. And you know, when I DJ, we play some really crazy, electro stuff, and it's really hard bass and drum rhythm. So how would I not love that, right? It's not like I'm a violin player DJing -- I'm a drummer and I get it. I know what people like to dance to. If it moves me, it will move other people."

The new Methods of Mayhem effort will hit stores in early 2010. The album will be eclectic and feature contributions by unknowns thanks to Tommy's Public Record contest. For eleven weeks, budding musicians can upload contributions to The Public Record. Tommy and his production team will mix in the best contributions and use them on the new record, 'Public Mayhem.'

"There's a video portion of The Public Record site where you'll download and upload tracks. There's also video submissions where people can, you know, film themselves actually playing the part, or they can walk around farting, drunk. Anything is welcome. I'm sure we'll get some kooky stuff. We're looking forward to that...that might even be content for a video, you never know. With an 'anything goes attitude,' god knows what will come out of this!"