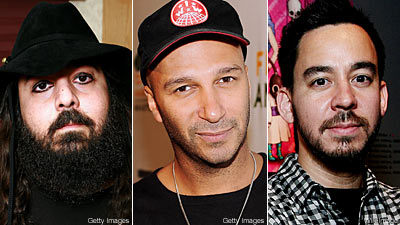 It should come as no surprise that Cypress Hill's new album 'Rise Up,' which is out April 6, will feature guest appearances by System of a Down guitarist Daron Malakian, Rage Against the Machine guitarist Tom Morello and Linkin Park vocalist Mike Shinoda.

The stoner rap pioneers have had a long history of working with rock and metal bands, and even sampled Black Sabbath's 'The Wizard,' 'Wicked World' and 'Black Sabbath' on their second album, 1993's 'Black Sunday.'

Later that year, Cypress Hill launched a college tour with Rage Against the Machine and Seven Year B---- and performed with Pearl Jam on one their two tracks on the rock/rap hybrid film soundtrack 'Judgment Night.'

And last October, Cypress Hill's Smokeout Festival in San Bernardino, Calif. also featured headliners Slipknot, Deftones, Bad Brains, Pennywise and some bad-ass rappers. That brings us to 'Rise Up,' Cypress Hill's first album since 2004's 'Till Death Do Us Part.' The title track was co-written and co-produced by Morello, who also plays on the song. 'Trouble Seeker' includes guitar work and production by Malakian, and 'Carry Me Away' features rapping and production by Shinoda. 'Rise Up' also sports guest appearances by singer-songwriter Marc Anthony, rappers Pitbull, Everlast, Young De, Evidence, the Alchemist and legendary drug culture comics Cheech & Chong.

"We spent time in the studio with some of our favorite artists and friends and we're really proud of how the album turned out," said Cypress Hill rapper B-Real. "We're looking forward to taking these songs on the road and playing them for our fans around the world."

Light 'em up and take it in.