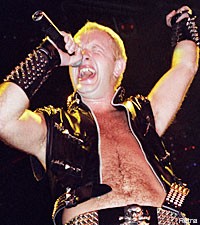 The high pitch scream is as synonymous with heavy metal as Dio's "metal horns." Throughout the 80s, approximately two out of five metal bands employed a singer who rocked the high-pitched delivery and wasn't afraid to use it. The next decade was especially rough for acts who favored this singing style. The onset of grunge and the pop-punk explosion put a lot of traditional sounding American metal groups out of business, but strangely enough the sound's popularity actually grew in the rest of the world.

Now with bands like DragonForce flying the high-pitch metal flag and crossing over into the mainstream consciousness, there's no telling where we're heading. Don't be surprised if you start hearing about metalheads trading in their Slipknot records for the latest Blind Guardian album.

So now Noisecreep has compiled a list of 10 high-pitch metal vocalists who deserve your attention. So sit back, check out our picks, and crank 'Screaming For Vengeance' but just don't strain your voice trying to copy these falsetto terrorists!

Rob Halford (Judas Priest, Halford, Fight)
We're not really going out on a limb by saying that Halford might be the guy who first put the high-pitched singing style on the heavy metal radar. Most frontmen had been picking from the blues-rock tree, but after songs like "The Ripper" and "Victim of Changes" made their debut on 1976's landmark Sad Wings of Destiny album, things would never be the same. Halford had inadvertently invented an entire new way of singing heavy metal. He would go on to revisit his higher register throughout his discography no matter what the current trends might have been at the time. On the title track to Painkiller (1990) he went even further, pushing his instrument to skyscraper-like heights confusing some fans into thinking it was a new King Diamond single. Anyone who has seen Priest in concert recently knows that Halford's voice is as commanding as it's ever been. You'll notice that Halford is referenced often on this list. They don't call him the Metal God for nothing!

Russ Anderson (Forbidden)
Interestingly enough, when Rob Halford left Judas Priest, rumors were going around the underground that Forbidden's burly frontman, Russ Anderson, was being considered for the coveted position. Though the job would end up going to Tim Owens, there's little doubt Russ would have been a great fit. Anderson always brought a certain level of elegance to Forbidden's material that was informed by the New Wave of British Heavy Metal-era bands of the late 70's early 80's. Forbidden certainly weren't the only thrash outfit who employed a singer that embraced a high-pitched delivery style, but make no mistake, no one in that world did it as effectively. Look for a new album from the recently reunited Bay Area legends later this year.

King Diamond (Mercyful Fate, King Diamond, Black Rose)
No list of high-pitched metal lords would be complete without the king of falsetto himself, King Diamond. From his earliest work with Black Rose to the influential albums he made with Mercyful Fate and his solo band, the Danish singer has taken the art to whole new levels of creepiness. Countless vocalists have tried to imitate Diamond's distinct wail throughout the last three decades often to dismal results. His opening paint-peeling scream of "grandma" during the opening verse on 1988's "Welcome Home," (from the album 'Them') is one the most instantly recognizable moments in the metal canon.

John Arch (Fates Warning)
Although it happened all the way back in 1987, fans of progressive metal still talk about John Arch leaving Fates Warning like Red Sox fans talk about the 1986 World Series. One listen to his falsetto attack on songs like "Fata Morgana" (at about the 0:47 mark) quickly reveals why. While he wasn't the only vocalist doing this kind of thing back then, Arch did it with a power that still inspires up and coming screamers to this day. Fates Warning would go on to replace him with Ray Adler who has done a fine job leading the Connecticut act all these years, but for many, Arch is still the definitive singer of the band.

Michael Kiske (Helloween)
Throughout Europe and parts of South America, where power metal bands make the covers of magazines, Michael Kiske is a living legend. His vocal style is the blueprint on which singers like Timo Kotipelto (Stratovarius) and Hansi Kürsch (Blind Guardian) have helped based their careers. Though he fronted Helloween for four albums, only a couple of them can honestly be called all-out metal. The two parts of the Keeper of the Seven Keys saga are like sacred scrolls to fans of the genre and Kiske's soaring voice is the centerpiece. The German's performances on classics like "Eagle Fly Free" (above) and "Dr. Stein" showcase a singer at the top of his game rocking the kind of vocal cord gymnastics only dared by true masters.

Michael Sweet (Stryper)
We could see you yelling at your monitors now, "Stryper?!" But get past whatever preconceived notion you might have about these Christian rockers because Michael Sweet has one of the more ear-splitting howls you'll here anywhere. Check out albums like 'Soldiers Under Command' and 'To Hell With The Devil' if you don't believe us. Ironically, as the band's profile got higher, his pitch got lower. Sweet still found ways to sneak a high note, here and there, on their later ballads, but we bet Stryper's label wasn't too hot about the idea.

Ralf Scheepers (Primal Fear, Gamma Ray)
Just because he's relatively unknown outside of power metal circles doesn't mean Ralf Scheepers can't throw down. The Primal Fear lead singer possesses one of the most menacing screams in metal today. Scheepers' virtuosic performances have had many journalists comparing him to Rob Halford (we told you he'd be name checked a lot here!). Although he'll probably never see wide acclaim stateside, don't think for
a second that Scheepers' whale of a voice couldn't fill out an arena.

Geoff Tate (Queensrÿche)
Perhaps the best all-around singer on this list, Tate has never sounded less than completely in control of whatever style his bandmates seem to throw his way. His four octave range has stunned listeners for decades but his utter dominance of the higher range in his voice is what lands him here. On early Queensrÿche standards such as "The Queen of the Reich" and "Warning," Tate goes for the throat (no pun intended) nailing some of the loftiest notes this side of Tosca. It's no wonder many fans mistakenly thought the German born singer had been trained in opera. Queensrÿche's 90's releases would abandon most of the Euro-metal leanings of albums like 'Rage For Order' and 'The Warning,' but 2006's return-to-form 'Operation: Mindcrime II' found Tate and his cohorts embracing their roots again.

Mark Boals (Yngwie Malmsteen, Royal Hunt, Ring of Fire)
This American singer is known as a master of the soprano high A (A5) note which he often uses throughout his expansive discography. Whether it's his earlier contributions fronting shred maestro Yngwie Malmsteen's band Rising Force or his newer material with Royal Hunt, Boals has proven time and time again that his vocal dexterity knows no bounds. His marathon vocal runs are awe-inspiring, but when he lays into those Herculean higher notes he still makes it all look deceptively easy.

Jim Gillette (Nitro)
When a non-metal outlet wants to write a piece mocking the genre, there's a good chance that they'll use a photo of Jim Gillette in it somewhere. The Nitro vocalist's peroxide and Aqua Net covered hair and outrageous stage costumes clearly show us how ridiculous things got at the tail end of the hair metal invasion. As much of a punching bag as Gillette ended up becoming in the press, his high-pitched attack is nothing to laugh at. It's hard to imagine a throat actually producing a sound as penetrating as the long shriek he lets out right before the guitar solo (at the 1:11 mark) on Nitro's single "Freight Train." Showing no regard for the time period, Gillette also released a vocal training video during the grunge era entitled Vocal Power where you can actually see him shatter a wine glass with the sheer might of his voice!