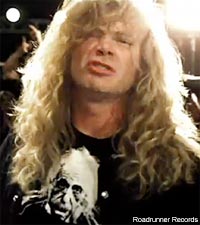 When Stephen King released his novel 'The Running Man' in 1982 under the name Richard Bachman, the idea of a game show in which criminals were hunted by bounty hunters and killed on national television was entertaining, but pretty far-fetched. Today, the premise is far closer to reality. Reality shows like 'American Gladiator' and even the hokey 'Wipe Out' already depict players as victims. The only thing missing is convicts and murderers -- though some would argue the programmers and producers fit that profile to a T.

Megadeth frontman Dave Mustaine is well aware of how close society is becoming to a cruel reality show, and he wanted to depict the barbarism in the band's new video, 'Head Crusher.'

To create the video, director Patrick Kendall created a scenario that blended elements of the 1987 film 'The Running Man' with 2000's 'Gladiator' to concoct a violent scenario matching the energy of the high-impact song. The synopsis is simple but effective: Mustaine is playing emcee (like Richard Dawson in 'The Running Man') on a show where hooded criminals in jumpsuits are brought into a ring, unhooded and exposed to a mixed martial arts battle to the death while the band plays on a raised platform. If they win, they're pardoned. And if they lose, well, their troubles are also over.

"I was listening to the song, and I heard the line about 'prisoners,' and I thought about 'The Running Man,'" Kendall tells Noisecreep. "So I went back and watched that and 'Gladiator' again, and then I wrote the treatment, which added in some MMA fighting."

The 'Head Crusher' video features MMA Brazilian jujitsu fighter Jorg Oliveira, as well as other lesser-known grapplers. "All of these guys were either real fighters or they were people who trained and did this for a hobby," Kendall says. "The stunt coordinator wanted to make sure everybody had some skill in fighting to make it look as real as possible."

The video also stars actor Chad Bannon, who played Killer Karl in Rob Zombie's 2003 flick 'House of 1,000 Corpses,' and who also appeared in 2001's 'Planet of the Apes.' "I think he wanted to get out of acting and concentrate on fighting," Kendall says. "He's had a couple of mixed martial arts events and in one of his bouts he knocked a guy out in 20 seconds."

In 'Head Crusher,' Bannon's not exactly exhibiting his primo fighting skills -- he's getting his ass kicked. About halfway through the video, a convict is unhooded, who turns out to be gorgeous female fighter Michelle Waterson (a.k.a. the Karate Hottie). And in just a few moments, she wipes the floor with Bannon and earns her release.

"She's one of the few female true mixed martial arts fighters that's also beautiful," Kendall says. "She actually does bikini modeling, and the idea was to have a really hot girl who really knew how to fight. Before we got her to come onboard, we were looking at all kinds of girls in L.A., but they were no Michelle Waterson. We flew her up the day before the shoot. She's actually a pretty good fighter and a lot of her fights end up in either TKOs or submissions. It's funny because Michelle actually clocked Chad a couple times during the shoot. Those were real kicks and he came out of there bruised."

The cast and band shot the video with Kendall on July 28 at a studio in Northern Los Angeles. While the shoot was exciting and filled with laughs, at times it was also grueling. Aside from all the rigorous fighting, the platform that Megadeth performed on ascended 20 feet in the air while the band played, and the musicians were tied down so they wouldn't fall off during scenes that were shot repeatedly throughout the day.

"They were up in the rafters where all the heat was, so they were all sweating," Kendall says. "It was probably a very unusual situation to perform in and be on camera, but Dave Mustaine was just great. Every time I'd ask him to do another take he was like, 'Sure, definitely.'"

In addition to being a team player, Mustaine was also a creative force for the video. He offered suggestions to Kendall, including having the state-appointed character look at Waterson with double vision as he's getting his head crushed. And, because of his background in Taekwondo, he corrected the director when there was a technical problem with a fight scene.

"He actually called me out at one point," Kendall says. "Waterson did a 360 kick, and I cut to a close-up and it was a sidekick, not a 360. And Dave pointed that out and made me change the shot. He actually knew the kicks and everything, which was really helpful."