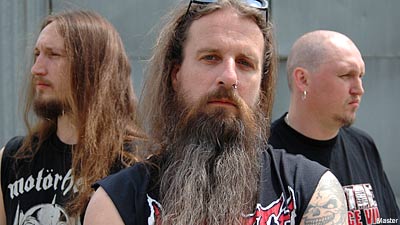 Death metal icons Master are celebrating 30 years of headbanging bliss and death metal glory as they recently recorded their newest album, 'The Human Machine,' for Pulverised Records. "It may sound corny, but truthfully, 'It's along way to the top if you wanna rock 'n' roll,'" frontman and founder Paul Speckmann told Noisecreep, referencing AC/DC's classic hit. "And I am far from it. I have been struggling in the underground forever. But let's face it, for many, metal is a hobby, but for me it's a way of life. I live and breathe metal!" Speckmann admitted he was listening to Frank Sinatra's 'Greatest Hits' collection, produced by Bruce Springsteen, while talking to us, but his commitment and dedication to metal is unwavering!

While classic death metal bands are reforming and coming back to the forefront in recent years, Master aren't entertaining any delusions of grandeur. Speckamann said, "Today, there are all these so-called death metal bands reforming, and it's certainly only for money. All you have to do is look at the pictures of these silly, fat and balding guys that gave up years ago to live regular normal lives. I grew up on the school of [Black Sabbath], [Led Zeppelin] and Deep Purple, where not only playing an instrument was important."

Master will be spreading the death metal seed with tours in Brazil, South American and the U.S. Even this deep into their career, Speckmann still gets a charge and a thrill out of getting up on stage every night. "It's great still to get up, night after night, and play the classics of Master from the early '80s," Speckmann said. "There is nothing like watching the crowds singing along and screaming out the names of the tracks from our beginning days. We still play a killer show, whether there are 20 people or 5,000, which happens from time to time."

'The Human Machine' is due out in March, and Speckmann deems it "the most aggressive records we have ever recorded." That's to be expected, of course, but Speckmann points out that there's no way it couldn't be brain battering! He said, "With all the commotion going on in the world today, it's no wonder why. We are becoming human machines working for our governments to help fuel the war machine. The economy is shot, the rich are benefiting from this mess and the poor are dying in their own backyards. Big brother is looking over our shoulders, and with all the ever increasing new technological advances, freedom is nearly lost."

It's a bleak picture of the world, but listening to 'The Human Machine' certainly makes life more tolerable.