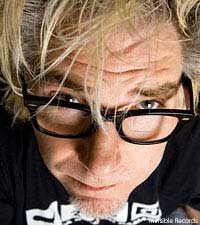 These are busy times for Chicago industrial music artist Martin Atkins. He's juggling four young sons, the release of Pigface's new album '6,' and the opening of a music industry school called Revolution Number Three. "It really is crazy right now," Atkins said during an interview with Noisecreep. "It really is."

Released on June 16, '6' marks the first Pigface album in more than six years and the first on a label other than his own Invisible Records. But Atkins makes it clear that he wasn't slaving over every note for the last handful of years.

"I just got busy," Atkins said. "I went to China twice, made a bunch of music in China. There's a song called '6.6.7.11' and there's a version of that song with a guy called Xi Chen who sings on it. He did a Chinese version of '6.6.7.11'. There's all kinds of different people playing on it. I mixed a track in Beijing. It was one of those things that very slowly and gradually came together. It wasn't six years of working my a-- off."

It was that trip to China that rekindled his love of music.

"I've been doing this for a long time," Atkins said about his music career. "I joined Public Image Limited in 1979. To be able, in 2006, to go over there and have my head blown off by a bunch of really great Chinese bands, it really excited me. That was good news for me, bad news for the Pigface album, I guess you could say."

After the China project died down, Atkins decided to dedicate his time to '6.' The result is "a very focused and cool-sounding Pigface album."

"Some Pigface albums can go completely off the rails," Atkins said. "That's fine with me and I think that's fine with most of the fans. But this one is pretty focused and hard hitting I think, in a good way."

Pigface members have included a virtual who's who of industrial dance music. Past contributors include Trent Reznor (NIN), Ogre (Skinny Puppy), Taime Downe (Faster Pussycat), and an ever-rotating cast of notable artists. This album includes collaborations with Chris Connelly of Revolting Cocks, En Esch of KMFDM, Charles Levi of My Life With the Thrill Kill Kult, Lee Fraser of Sheep on Drugs, Curse Mackey of Evil Mother, Hanin Elias of Atari Teenage Riot, Mary Byker of Apollo 440 and members of Zeromancer.

"The guys from Zeromancer, a Norwegian band, they toured with Pigface years ago," said Atkins, who penned the book "Tour Smart." "I stayed in touch with them. I was in Norway promoting my book and ended up sitting in their studio. They're big stars over there. I ended up hooking up with them and they worked on a track.

"Chris Connelly sings 'Electric Knives Club.' I think it's some of his best work. It's a good mix of the regulars and some really cool new people as well. Whatever touring plans there are, I hope to have a similar vibe with the tour, a good group of performers that people know and a bunch of performers that people have never heard of. People always say, 'Well, yes, Trent Reznor from NIN was in Pigface.' But when he was in Pigface, nobody had a clue who Nine Inch Nails was."

While promoting '6,' Atkins is opening a music industry school called Revolution Number Three in Chicago. Atkins has been teaching for six years at the likes of Columbia College in Chicago, University of Southern California, California Polytechnic State University, Drexel University, New York University, the Music Institute in Cologne, Germany, and the Mesa (Ariz.) Conservatory of Music.

"They'll be guided by myself, a couple of other professionals from the academic sphere and we're already forging relationships with real companies that my companies have worked with," Atkins said about Revolution Number Three. "They'll really be getting their hands dirty, learning in the old-style way like in an apprenticeship way. We're not shy of more traditional things but it's going to be rooted in a real world environment. It's really exciting. Quite time consuming. It's really exciting."