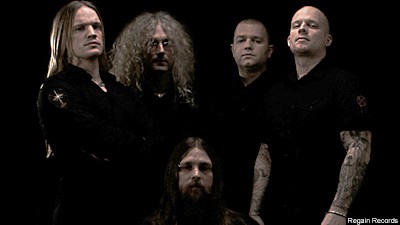 Is it a silly question to ask whether Swedish death metallers Månegarm are into paganism and Viking lore? Yeah, apparently, it really is. "Of course we're pagans," Månegarm's vocalist/drummer Erik Grawsiö tells Noisecreep. "And with our music, we try to light up that pagan flame in others, too. Our lyrics handle the Norse mythology and the Viking era, but they're also about exploring the spiritual side of things such as nature and its beings, for example. There are so many things in our folklore to explore, and we want [music fans] to do that with us."

Grawsiö admits that he's not a fully paid-up, practicing pagan. "[Bassist Pierre Wilhelmsson] is the one of us that is into it the most, as he practices our ancient customs," he says. "For me, it stays with a big interest. I think it's a really interesting and fascinating subject. I guess I got into it in some way when I started playing in Månegarm."

Månegarm formed in the mid 1990s and was originally called Antikrist before switching to their current moniker, a name borrowed from that of the vampire wolf of Norse legend. "We started up in the cold end of 1995, because a couple of drunken metalheads from Norrtalje, Sweden decided to start playing some raw and primitive black metal," Grawsiö recalls. Though it seems there are a lot Scandinavian pagan metal bands, the genre isn't that big in Sweden, Grawsiö says. "Besides from Månegarm and Thyrfing and maybe [a few] other bands, it's quite dead."

Of course, to many folks who aren't metal fans, it's all pagan. Grawsiö laughs. "I guess you're right. I have also heard such things from 'non-metal' people, but I have nothing to say to those people. They are probably not interested in what we're doing, and therefore they don't know what they're talking about. Some people like what we do and some don't, that's just the way it is."