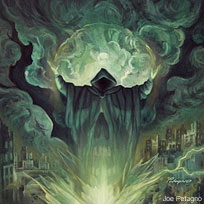 Mammoth Grinder's 'Extinction of Humanity,' being released in CD and digital format by Relapse Records, already received the vinyl treatment via Cyclopean, which is a good thing considering Joe Petagno's artwork graces the cover. A hooded and smoky spectre with wide arms oversees the doom of a city below. From a distance, you can easily make out the skull embedded in the spectre's figure.

The end of the world or humanity seems to be an important theme amongst metal bands as of late, and Petagno incorporated this idea into the art. "The end of the world as we know it -- which I'm sure your readers will agree is rather timely," Patagno told Noisecreep. "Look at the current world situation: the climate, the economy and ignorance in the face of impending disaster from all corners."

Petagno uses the hooded figure as a representation of humanity's possible impending doom. "Over our shoulder," Petagno points out. "[Is] the angel of death and destruction, which I might add, we ourselves have created, due to human stupidity, corporate greed and bad politics."

Mammoth Grinder will be touring with Dead City all throughout January in support of 'Extinction of Humanity.'