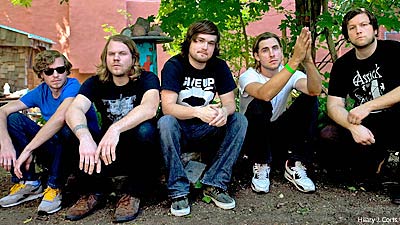 When it comes to running his record label, Cyclopean Records, Iron Age vocalist Jason Tarpey takes an old-school approach. "I'm really old fashioned," Tarpey told Noisecreep. "I handwrite all the labels. I pack everything myself. I'm not very savvy on the Internet. It's time consuming, but it gives me something to do."

Cyclopean Records has been keeping Tarpey busy while he awaits the Feb. 17 start to Iron Age's tour with Skeletonwitch, too. "It's going to be cool," Tarpey said of the tour. "We played one show with them; our last show on our European tour. I think it's going to be really awesome. And we're playing cities we don't normally play or had a chance to play really recently."

On this tour, Iron Age will be debuting new songs from an as-of-yet untitled record they're penning. It will be the follow-up to the eight-song collection 'The Sleeping Eye.' "We have, like, five almost songs written and one full one we've been playing live," Tarpey said. "We've been trying to get 25 minutes worth of music. How many songs that ends up being, that'll be our new record. We're thinking of doing a 12-inch EP.

"Even though it's an EP to most people, it's really like an LP. It's five songs. It's still a lot of music. It takes just as long to write an EP as it does an LP. Recording an LP, 'The Sleeping Eye' cost so much because it took so much time. We're not like most bands. We take a long time in the studio. We just always f--- around in there. We try every single option out. Sometimes get a little too drunk or too high and things take a little too long."

But for now, he's focusing on writing new material and running Cyclopean, which was formed to release Iron Age records before they were signed to Tee Pee. Once Iron Age was up and running, Tarpey thought he would only release bands' demo tapes. However, it has evolved from there.

"I'm working on my fourth record right now," Tarpey said about Cyclopean. "Mammoth Grinder is a band from here [in Austin, Texas], and they sound like early Swedish death metal. I put out a doom band from L.A. called Green and Wood. They sound like [Black Sabbath] mixed with Sleep. I'm about to put out this Canadian thrash metal band, too.

"When I press records, the band doesn't have a problem with me bringing them on the road and selling them on the merch table. That helps me make money while I'm gone. They don't really care. They understand. I have time to do both. It's not like I'm so busy that one of them suffers."