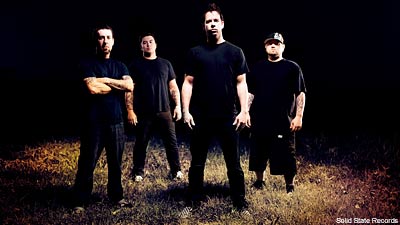 Living Sacrifice, veterans of the metal music scene, have reformed and will release 'The Infinite Order' on Jan. 26. Guitarist and screamer Bruce Fitzhugh takes aim at atheism on the track 'Nietzsche's Madness.' "Nietzsche was a 19th century German philosopher and atheist, who is most famous for declaring 'God is dead,'" Fitzhugh told Noisecreep. "The song references the ultimate outcome and rationale of atheistic thinking, where life is random (by pure chance) and has no meaning."

The lyrics were inspired by a book by Christian writer and lecturer Ravi Zacharias, titled 'Can Man Live Without God?' Fitzhugh believes that man might be able live without God, but it doesn't seem to turn out very well.

"[Nietzsche's] philosophy eventually influenced Hitler and the Nazis," Fitzhugh went on to explain. "Part of the lyrics are influenced by a parable that Nietzsche wrote called 'The Madman,' specifically the line in the song 'Where is God? Have you killed him?' The parable reads, 'Whither is God? I Shall tell you. We have killed him -- you and I.' Ironically, toward the end of his life, Nietzsche showed signs of insanity himself, and that is where the title of the song came from, along with the title of his parable."

Living Sacrifice will tour the U.S. in February with Shai Hulud and War of Ages.