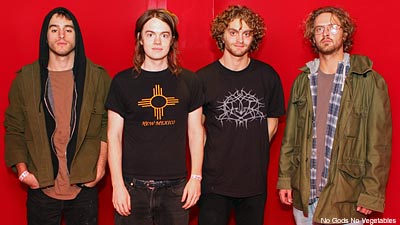 Black metal is not a genre based on image, and Scratch the Surface zine emphasizes the contrast between Liturgy's bland fashion and "a minimalist, grim, dissonant and blizzardly fast black-metal sound exhibited in their debut recording 'Renihilation' that could rival with the grimiest and disgustingly-looking band coming out from the depths of Norway." Hunter Hunt-Hendrix (guitar/vocals) feels that "America has never developed a distinctive black metal of its own," and adds that "even though there's so much of it, most of it is just a pale imitation of the European model."

Nihilism runs deep in black metal, and Hunt-Hendrix is not too shy to discuss Nietzsche and his personal philosophy within the music. Misery is what led him to black metal, but his goal is "to transform black metal from an expression of nihilism into a transcendence of nihilism." Based out of New York, the band has a plethora of influence to draw from. Liturgy began as a one-man band, but due to the lack of a black metal scene in Brooklyn, N.Y., Hunt-Hendrix eventually formed a band to be able to perform the music he'd been making for years.

The pangs of being based in Brooklyn have also, at times, hit Liturgy with the accusation that they are part of a hipster invasion upon the metal scene. Hunt-Hendrix points out that 'hipster' has become an elusive term, and even though he doesn't consider the band members' metalheads by the classic definition, he assures that sincerity and authenticity as a black metal band is there.

Liturgy recently played at the opening for 'Until the Light Takes Us' in New York and will hopefully be hitting the road soon.