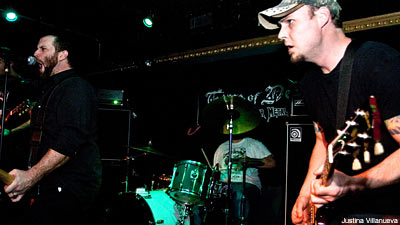 "Thank you all for sticking around to check us out," the very modest Cable bassist and vocalist Randy Larsen said to the Fontana's crowd on Dec. 3 in New York City.

"Thank you for showing up," a fan fired back at the band. For an act that's broken up probably over six times, people are just happy that they still exist and make music.

The Connecticut stoner rockers played Fontana's with Sea of Bones and Liturgy. It was one of those free beer, free shows that Tones of Death loves throwing to get every metalhead in Manhattan wasted and headbanging. 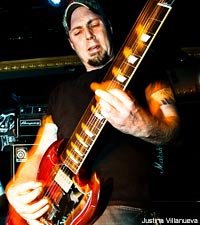 "Oh, I'm asking the bartender for more vocals," Larsen said after he realized he was talking toward the bar and not the sound guy, who was much closer to the stage. No, the free beer didn't get to this musician. His excuse was a 13-hour drive. And I guess that'll do it. But trust me, as tired as he seemed at that moment, he wasn't playing a tired set.

Christian McKenna of the band Slacks filled in on some super soulful guest vocals for a couple songs off the new album. It wasn't too long after that they went into a big rock ending, usually a signal that a band is bringing their set to a close. There was no call for an encore, and the night was over at the removal of their guitar straps.

Check out the band's new record 'The Failed Convict.' It was released via The End Records just this August.