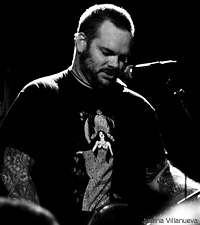 While Scott Kelly (Neurosis), Wino (Saint Vitus), Al Cisneros (Om, Sleep) and Dale Crover (Melvins) were combining their masterful minds below Bleeker Street, a line that included women in tall glittery boots, fishnets and bust-breaking corsets and men dressed just as club-ready was developing outside for a fetish party that was happening in the same venue.

Nov. 15 began with local black metallers Liturgy and southern, blackened doomsters Rwake. But it wasn't until the stoner supergroup took the stage that Le Poisson Rouge got uncomfortably full. There was no room to move or walk. As part of a Blackened Series Weekend, Shrinebuilder's first New York City show was easily the most anticipated.

From sluggish doom to foot-stomp worthy sludge, Shrinebuilder members have truly combined super forces and made some music that is actually fun to listen to. The foursome was covered in a blanket of blue to red light throughout their set.

"And since you're all good boys and girls, we got buses parked outside. We're gonna take y'all for milk and cookies!" drummer Dale Crover said, sending New Yorkers outside after the band's transcending performance.

Shrinebuilder's selt-titled debut release is now out on Neurot Recordings.