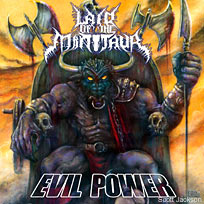 Chicago's lo-fi dirty metal trio Lair of the Minotaur released their fourth full-length this week, bluntly titled 'Evil Power.' Painter and illustrator Scott Jackson graces the release with his talent, though with his strong background in the bright cartoons of old school horror art, one might not immediately attribute it to him.

Jackson told Noisecreep about the basic inspiration behind the album art, saying, "The Lair of the Minotaur's new 'Evil Power' cover art is an exercise in 'old school' metal imagery (acrylic on Bristol), while purposely departing from the common 'black, red' cover schemes seen so often, in an attempt to be 'new school' again. Referencing the vibe of such covers as 'Molly Hatchet,' 'Demon Sweat Live' and the 'Evil Power' video itself, which portrays the bad-ass minotaur as live action. "

Just a cursory look at Jackson's website and his body of work reveals his use of diverse palettes, attention to detail, and a love for the classic horror and comic book aesthetic. His human (and humanoid) forms straddle the line between realism and exaggeration, and they drip with wild color schemes as much as they do with blood and gore.

"Frontman Steve Rathbone knew I had done previous work for Electric Hellfire Club, Num Skull, Macabre, Jungle Rot, etc.," Jackson said. "But it wasn't until he saw some concept sketches of the minotaur's 'throne' that he contacted me and gave me a shot.

"The king-like minotaur character could have gone in many different color and technique directions," Jackson continued. "And it was hard to decide the final version. When the album's distributor bumped up the deadline by a week, I chose the dramatic contrast which you now see, and hopefully makes you feel a bit mighty and brutal and fantastic."

Lair of the Minotaur will embark on a short tour this month to support the release of 'Evil Power.'