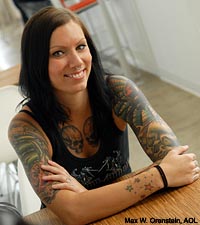 Yesterday, Winds of Plague keyboardist, the tattooed hottie known as Kristen Randall, who also enjoyed a stint in Abigail Williams prior to joining Winds of Plague, announced she was exiting her post in the band in order to pursue other opportunities.

In a prepared statement, Randall gushed about her now-former bandmates, saying that she will cherish the experiences she had in the band and that she hopes to work with musicians in the future who have the same work ethic and disposition as the dudes in Winds of Plague.

Randall spoke exclusively to Noisecreep about leaving the band, who just released 'The Great Stone War' on Century Media in late summer, saying, "This departure has been one of the most difficult decisions in my life. I do not regret any of the time I spent with the band, and I appreciate all the growth I've experienced in the time I spent in Winds of Plague."

She further elaborated on her future plans, saying, "From this point on, I would like to see myself working with more types of entertainment and fine art, such as modeling, acting and doing make-up art while continuing to hone in my talents as a musician. I am striving to make vast improvements in my life and career and can't wait to see what the future brings."