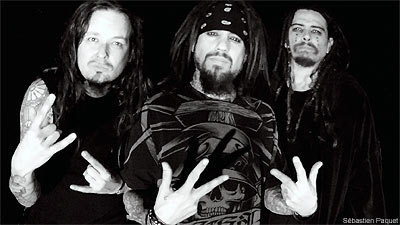 Korn bassist Fieldy describes his playing style as minimalist. "I really like that bass is like less is more. I like that -- when you hear a bass player that lays a really solid foundation," he tells Noisecreep. Yet on his upcoming solo album, aptly titled 'Bassically,' he went for the mother lode of bass playing, multi-tracking lead and rhythm parts using a 15-string bass, stand-up bass, fretless bass ... you name it, he used it.

"It's insane, man. I did so many lead tracks and rhythm tracks. Sometimes, it's chaotic. It kinda takes you on a ride through the CD, so you can have a mellow funk track next to a chaotic bunch of basses going crazy. Right now, I have 11 songs finished. I might do two more, but it's pretty much done," he says.

This, Fieldy's first truly solo effort -- it's just him and his basses -- is clearly a vast departure from the music he's done in other side projects, such as the rap act Fieldy's Dreams or his garage metal band Stillwell. "I'd say it's like a jazz fusion funk type of thing. Real new age, too. Different kinds of music." Yes, he said new age. "I've always wanted to do it. When I was younger, learning bass, I listened to a lot of bass albums; Stanley Clarke, I grew up listening to that type of stuff."

Fieldy hopes to release the record this year. But, what with a new Korn record lined up for release and accompanying tour dates, including a headline spot on this summer's Mayhem Festival, he needs to line this divergent record up just right. "I don't want people to be confused and buy it and not like it. It's not heavy," he reminds. "I don't want people to get it and think, 'Man, I can't believe I bought this crap'. It's not meant to be heavy. If you like heavy and are not open minded, you will not like this."