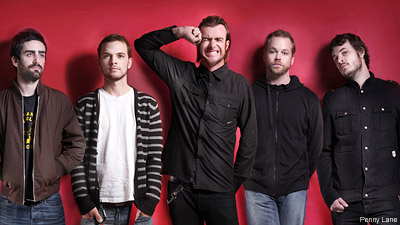 Prog rockers Karnivool have been hailed as one of Australia's best exports. Singer Ian Kenny calls that one of the biggest compliments he's heard. "I think it's an overwhelming compliment," Kenny told Noisecreep. "It's an amazing thing to hear."

But there is no pressure to live up that expectation, he explained. The only pressure the band feels is within itself. "We challenge ourselves through songwriting and how we come across as a band and we come across as a live band," Kenny said. "I hope it remains that way. I don't think the band intends to let any outside pressures affect what we do. We give ourselves enough on a musical front."

Kenny and the rest of the band -- guitarists Drew Goddard and Mark Hosking, bassist Jon Stockman and drummer Steve Judd -- challenged themselves on their latest EP, 'Set Fire to the Hive,' which hit the digital market on Sept. 15. The 25-minute release kicks off with the title track and continues with 'Themata,' the melodic title track to the 2005 release, followed by an unreleased version of 'Roquefort' with the Empire Horns. Closing out the EP is the nearly 11-minute opus 'Deadman,' recorded live at The Forum in Australia.

The song 'Set Fire to the Hive' is also featured in the new 'Pools of Blood' iPhone game, a fast-paced tower defense game.

"I think the premise behind 'Set Fire to the Hive' is it sounds frustrated, a bit pissed off," said Kenny, whose band will tour the States next year after the February release of the full-length album 'Sound Awake.' "Like an angry bee buzzing around in a bottle. I guess it's a bit of a backlash, the hive being everything that is disjointed about modern-day society. We all have our concerns now, our own insecurities about where it's all going. As a band, we question everything. It's a double-edged sword that you can question too much and then you can't question enough."

Kenny is most concerned about people being unaware of their sociopolitical surroundings. "I am concerned that people are not taking the steps to investigate and pursue just common knowledge about where we're going," Kenny said. "What I'm trying to say is it's easier to stick your head in the sand and not sort of deal with it. We're not a really political-standing band, as such, but we would like to promote some sort of awareness that everyone has choices and you got to pursue and find out yourself. You make your own call, regardless of what other people say."

An avid surfer, Kenny would most like U.S. fans to know that there's an honesty within Karnivool. "If anybody picks up the record and likes what they hear, if they get drawn into the show, they'll see we're fairly honest," Kenny said. "We can't really hide anything as performers on stage. To this day, I don't know what it is, but people are reacting to this band. It's a really great thing."

Filed Under: Karnivool
Categories: Interviews
Comments
Leave A Comment
Back To Top