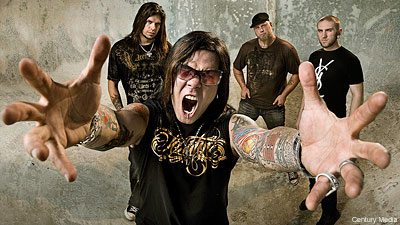 Jonny Santos made his name through his work in Spineshank, the California-based, nu-ish metal band that had a few hits in the earlier part of the decade. Santos parted ways with the 'Shank, who tried to replace him before disbanding, and went on to form Silent Civilian, a much more metallic-leaning project. The band's debut, 'Rebirth of the Temple,' was issued in 2006. Spineshank and Santos eventually found their way back to one another, but rest assured, Silent Civilian aren't going anywhere.

"Silent Civilian is and has been a full-time band since its inception four years ago," Santos told Noisecreep. "The Spineshank reunion is happening as well. I just have a very busy schedule, to say the least! When one band goes into down time, I will be touring with the other, which doesn't give me much of a break, but I enjoy what I do, so I don't really mind." Here's to hoping Santos buys stock in Red Bull. And we applaud his efforts to keep two bands vital and viable.

Silent Civilian are currently working on their second effort, 'Ghost Stories,' which is, according to Santos, "much more dangerous than the last. It is faster, louder and much more in your face than 'Rebirth.' It has more of a live feeling to it." Santos dubbed it a "guitar driven record with more emphasis on writing really violent riffs. We are playing with faster drum beats and even a few blast beats too."

Since he is going to be living on the road for the rest of his life, we probed him about his tour essentials and what absolutely goes into his knapsack.

iPod: "This is the first and most important thing, because I cannot live without my music. It also cancels out other people, when I want to be alone but can't be alone."

Baby wipes: "We don't always get showers on the road, so these help me stay as clean as possible."

Reading materials: "A lot of times, I would rather read a book than watch a movie. It helps me keep a creative mind. Having to picture something in your mind instead of seeing it on a TV screen is pretty cool."