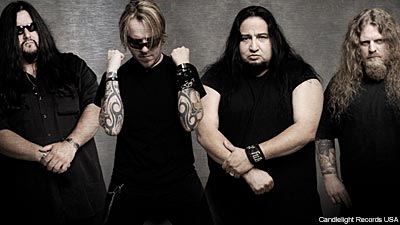 Fear Factory are a machine, and we're not just talking about their patented mechanized, cyberiffic sound, which they further develop on their latest album, 'Mechanize.' The band -- featuring the re-pairing of vocalist Burton C. Bell and guitarist Dino Cazares after the ouster of bassist-turned-guitarist Christian Olde Wolbers and drummer Raymond Herrera -- has confirmed another week of tour dates for the recently-announced second leg of their American Fear Campaign Tour. The second leg kicks off on May 14 in Tucson, Ariz. and boasts an impressive bill that includes Prong, Thy Will Be Done and Silent Civilian. The final week of dates will feature All That Remains, who'll replace Prong.

Fear Factory are also launching the third single from 'Mechanize' in the form of the controversial album closer, 'Final Exit.' The band doctored up two special edits of the 8-minute song, which takes a look at euthanasia, in hopes of recapturing the attention of the harder-edged stations that supported the band during the glory days of their 1998 breakthrough release, 'Obsolete.'

In a statement, Bell recently explained the desire to edit the song. He said, "Dino and I have created the edits to condense the song into a time specific for radio. We are very happy fans are loving the song for it is one that touches upon the importance of the freedom of choice and personal liberty that all human beings should be allowed."

The song is expected to create awareness for the support group Final Exit Network, the song's namesake. Bell continued, "The right to life extends beyond life itself. If the medical community cannot, and will not, find a cure due to cost effectiveness, then humanity needs the choice of a dignified, self-deliverance from continual, painful treatments from debilitating disease. We have been contacted by many fans who connect with this song on many levels, and with 'Final Exit' being played on the radio, we hope others will also become aware, understand, and enjoy this song."