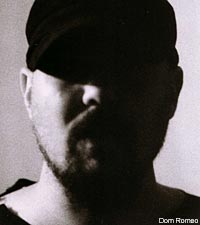 There are few musicians in the underground music community that incite as much adoration and hate as Integrity's Dwid. The vocalist has been doling out his harsh and depraved brand of hardcore for the better part of 20 years and no matter who is playing in his band at the time, it's clear that the singer is at the helm. Throughout Integrity's career, Dwid has never been shy to say what he feels. In that time he's made enemies with luminaries of the New York City hardcore world and been vocal about his disdain for his old label home, Victory Records.

Although he was born in the States and made his name in Cleveland, Dwid has since moved to Belgium, where he has kept the Integrity name alive with a revolving cast of musicians. Deathwish Inc. will be releasing 'The Blackest Curse,' Integrity's next studio album sometime in 2010 and he has also been releasing bands like Pale Creation and Blind to Faith on his very own Holy Terror label. In a surprising news release earlier this month, it was announced that Integrity would be part of the A389 Records 6th anniversary party weekend happening on Jan. 8 and 9.

In this rare interview, Noisecreep briefly spoke with Dwid about his career and some of the artists who have helped shape his dark work.

Can you remember which bands or styles of music made an impact on you when you were really young?

One of the first punk records I bought was in 1984. It was a double album compilation LP called 'Peace/War' and it featured extreme bands from all over the world. I was 13-years-old at the time and a double album was a great deal for my limited funds. I found the G.I.S.M. and Septic Death tracks and accompanying artwork to be life altering for me.

Why do you think you gravitated towards hardcore and metal?

I was interested in extreme music and art and during the '80s punk/hc/metal offered this as a creative outlet.

Your artwork has a definitive voice and distinct feel to it. Who informed that side of your work? I know Pushead was big for you.

Pushead is an amazing artist, musician and person. He is responsible for exposing so many people to new perspectives. My drawing style is a bit influenced by Pus, but also by early 1900s cartoons, with a 1950s/1960s graphic art aesthetic to shading. I find this style to be the most personal expression of imagery and of my imagination. I do not see too much of a Pus influence in my drawings, but I take the reference as a compliment. I have some further pursuits in plan for expanding my drawings into a greater dimension within my music and visuals.

I read that you were raised by your mother. Was she supportive of your artistic ambitions or was it a constant clash?

I was partially raised by my mother and my father. Both of my divorced parents were always quite supportive of my artwork, but never of my music.

There's a dark ambience around you and all of your musical projects. Do you think the public's perception of you is way off how you really are?

I cannot assess what the public's perception is. My music and imagery speaks volumes about me personally. I do not care what people think, as I prefer isolation to adoration.

Why are you so weary of doing interviews?

I'm not weary, just bored of the same typical questions for these 20 plus years.

Can you talk about your relationship with Boyd Rice? What about his work drew you to him?

Boyd is a dear friend and I have the utmost respect for him as an artist, musician and terrorist.

You made a name for yourself as part of the Cleveland hardcore scene in the 1990s, but you moved to Belgium a few years back. What prompted the move and was it a culture shock at first?

Cleveland was a place that my parents moved to in the 1980s. The music has no relation to the location. The other hardcore/punk/metal bands from Cleveland sound nothing like the music that Integrity has been making since 1988. It's actually a misnomer that there is some 'Cleveland hardcore sound.' I do not feel that there is any connection to Cleveland with my music. As for Belgium, I have always been enthralled by the Flemish art scene and it was probably inevitable that I would gravitate here.

You'll be playing the A389 Records 6th anniversary party on Jan. 9 in Baltimore. Can you talk about your connection to the label?

Integrity has released a few records on A389. Dom (the proprietor of A389) is a good friend of mine and I am happy to be a part of his birthday celebration.

It seems like Integrity's popularity has risen in the past year or so. Do you think staying away from the road has helped fuel the public's appetite?