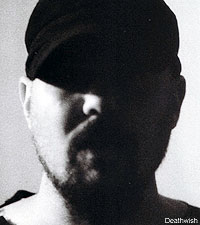 For 23 years now, Integrity have stood as an undeniable influence in hardcore -- Converge and Hatebreed act as references to the band's pension for the darkest riff possible. But the band has always stood alone. More importantly, founder Dwid Hellion has, surrounded by a revolving door of collaborators from all over the world.

'The Blackest Curse' is the first Integrity full-length in seven years, and though it holds the crushing shadows all the band's recordings have, it still feels like an album to look on, not join in. We all just happen to be witnessing another occurrence. "Integrity is a rather private and personal exorcism service," Hellion explained to Noisecreep through e-mail, the drifting isolation of 'The Blackest Curse' very intentional.

Since 1996's 'Humanity is the Devil' -- which was endorsed by perpetually-jailed serial killer Charles Manson and the Holy Terror Church of Final Judgment -- the music and harrowing scream of Integrity has existed stemming from the apocalypse driven views of Hellion, which is why he admits to drawing a near zero influence from other bands. "My inspiration has almost always come from sources outside of underground music. I suppose that I am fueled predominantly by my own imagination and my own personal belief system."

His personal belief system is built around the occult. "I have always been attracted towards finding some real answers about this plane of existence. Even as a child I was suspect of the belief systems accepted by the majority of the humans. My participation within secret knowledge applications has greatly improved my perspective and my state of this reality."

In the zine days of hardcore, Hellion was known as one of the most outspoken frontman willing and ready to rail against all he saw as useless and droll. The early days of Integrity were filled with bands and leaders of scenes going against the vocalist. Once he left the States (he now lives in Belgium), any conversations that were public focused on the beliefs behind the music. He openly admitted feeling the band was far from the tag of hardcore. "I have always spoken about topics that I find important to myself and to my close friends," said Hellion. "Whether these topics touch on the mainstream has never been of any interest to me."

One thing Hellion has never shied away from has been his adoration for Charles Manson, whose head is infused in the logo Integrity uses, as well as the Holy Terror Church -- an idea many have speculated was founded by Hellion but under the name Jack Abernathy. Despite numerous interview statements by Hellion, most see the religion of the end to be synonymous with the band.

"He has always been the adversary to the accepted social belief system," Hellion said of Manson. "He is both a political prisoner and religious martyr. A messenger and a bard. Like the execution of the Cathars on Friday the 13th, Manson stands as a reminder that the humans overlook truth for the comforts of blind mass conformity."

Under Hellions own label, aptly called Holy Terror, he recently put to press a new seven-inch recording from Manson that was done in prison. "Manson contacted me and asked if I would help his music be heard. I am honored to be a small part of his process."

Over the years, Hellion has called love a weapon surrounding the statement with a desire for the end of humanity. He admitted the mere conflict in ideas but sees a connection, saying, "Yes, humanity is a diseased prison, incarcerated within rotting flesh. Through love we wish to destroy these confines and free the souls from their Hell."

'The Blackest Curse' is out now on Deathwhish.