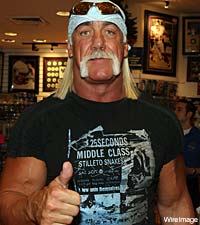 Professional wrestling superstar turned reality show trainwreck Hulk Hogan (real name Terry Bollea) discusses in his new tell-all book, 'My Life Outside the Ring,' how he wanted to put wrestling on hold to play bass for the Rolling Stones or Metallica.

In what has been dubbed "this year's most insane story," the Hulkster explains in a recent interview: "I was in England presenting an award with Jerry Hall, Mick Jagger's ex, and she told me The [Rolling] Stones were looking for a bass player. I sent her a ton of merchandise that she asked for and said 'Tell Mick I'm a great bass player.' I never heard a word back."

The 'Real American' tried his luck again with Metallica, who ultimately hired bassist Robert Trujillo after many tryouts in 2004's documentary 'Some Kind of Monster.' Says the Hulk, "When Metallica was looking for a bass player, I called and never heard a word back from them either. I would have quit wrestling in a heartbeat to be a bass player for Metallica."

The former wrestling champ hasn't quit wrestling yet, however, still making appearances to 'run wild' in matches worldwide despite his many injuries. 'My Life Outside the Ring' was released Oct. 26 in hardcover, and will be released in paperback on Nov. 30.