On March 26, Sevendust will unleash their ninth studio album Black Out the Sun. The album provides a raw and dark look into adulthood from the perspective of the five men who comprise the band. The Sevendust screams are there. The melodic tendencies are there. And Black Out the Sun even offers a track complete with an old-school '80s guitar vibe. That track, "Got a Feeling" encapsulates the album's entire theme in a handful of hard rocking minutes. And there's nothing contrived here.

"I woke up not so long ago, and I just felt like 'You know what, I'm older. Life's obstacles have become so much more obscure. But it's not going to deter me, disturb me, from my faith,'" Sevendust frontman Lajon Witherspoon tells Noisecreep. "At the end of the day, everything gets better in time. At least, I hope. That's my new outlook."

Black Out the Sun tackles aging, the loss of parents and grandparents and the changing world.

"With this album, we were able to tap into some emotions that we'd never felt as men," Witherspoon continues.

Witherspoon openly acknowledges Black Out the Sun is dark... and even the imagery of the Earth's heat source burning out is more than dark: it's apocalyptic.

"The title came to me. I had a vision of the sun being blacked out," explains Witherspoon. "I had a dream that I was being chased one night. Everyone knew in this dream – and I knew – that when that sun was going down... that if you weren't where you needed to be, you wouldn't be safe for whatever reason. It was an open dream I had. The album is dark and it has light too. It's life. We all have our ups and downs and I've definitely learned over these past years to not be afraid and run from struggle, but to embrace it and I think we were able to do that with this album and to paint that picture for everyone to see."

Witherspoon admits he occasionally dreams in color. And all his dreams and visions aren't nearly as catastrophic as the sun going black.

"I actually just had a dream. The only thing I remember is that I was talking to Hulk Hogan's daughter, Brooke Hogan, for whatever reason I ran into her in Florida. So I was coming out of a hotel and I ran into her and we were talking. I had just done 12 shows in a row and I could barely talk and I wanted to say so much to her because I love her father and she gave me a hug and said 'I understand. I sing.' And I was like 'Aw, she understands me, that's all I needed.' And in this dream my voice was completely hoarse and I remember waking up and clearing my throat, making sure I could talk. That was definitely almost a dream in color. I think that was closer than a dream in color for me," laughs Witherspoon. 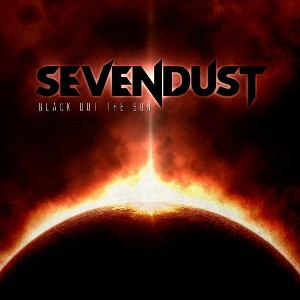 You can catch Sevendust on the dates below. The band will play Rock on the Range in Columbus, Ohio in May. Black Out the Sun will hit stores on March 26 and can be pre-ordered on iTunes today!

Sevendust and Lacuna Coil with Avatar: