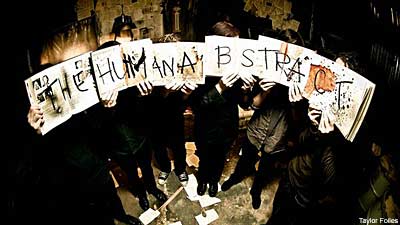 Henry Selva, bassist of the technically masterful The Human Abstract reported on how his band is spending its summer from Downtown LA, where he and drummer Brett Powell are currently sharing a loft overlooking the skyline. "Hold on," Selva said when asked the details of his summer vacation. "I just had to take a second to air drum some 'Shogun' by Trivium. Man, I f---ing love that song."

Selva revealed that his band finished their first North American headlining tour in May, which closed off the 'Midheaven' album cycle. "It was a very successful run, so thank you to all who came out in support," Selva said. "Immediately following the tour, [vocalist] Nathan [Ells] flew to Greece to perform some ancient rituals and cleanse himself of the evils of the world by submerging himself in the Sea of Crete. Or was it the Ionian [Guitarist] Dean [Herrera], from what I know, is running 10 miles a day and playing softball at USC. [Guitarist Andrew] Tapley and I spoke over the phone yesterday and he's back in Ontario, Canada. The smiling giant is currently working at a local bar in St. Mary's, bartending for all the lovely people out there. [Drummer] Brett [Powell] or 'Bretzel,' as I like to call him, spends his days watching Angels baseball, dreaming of the day that he gets to assist [third baseman Chone] Figgins with a throw to third base for an out. If it's not watching baseball or playing some MLB 2K9, Brett likes to fine dine with the best of them, savoring wines and socializing like the little butterfly he is."

It seems Selva is intently clued into his band mates, but what is he up to? "I love to hang out with my family and friends. They mean the world to me. If it's not grilling some carne asada in a backyard with a chest full of beer, it's going on hikes in the San Gabriel Mountains that over looks the LA Basin," he said. "Being that I am the newest member to the group, I also find myself sitting behind my basses, playing around with tones and wide-ranged techniques that will become the catalyst for a very different bass sound. I am excited to show [the fans] what I have to bring to the table. We're stoked to be writing a third album."