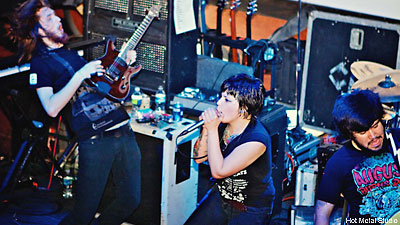 These days, there are metal bands of all kinds operating on all kinds of budgets, from barely-indie level all the way to major label productions. In Europe, though, no matter how big or small you are, a metal band can get the whole nine yards when they tour there -- a situation recently experienced by avant-grindcore band Iwrestledabearonce. "Every day you wake up and there's food set out; like good food," Iwrestledabearonce guitarist Steven Bradley told Noisecreep about their jaunt through Europe. "Deli meats, vegetables, cheeses, a full array of juices, hot water for tea. Whatever you can imagine. At every show that's normal."

The large tour package that invaded overseas included the likes of Despised Icon, Horse the Band and Oceano. They had stops in the U.K., Germany, Slovenia and Italy. Though the tour was sponsored by Jägermeister and Imperial Clothing, Iwrestledabearonce attributed their good fortune overseas to a different attitude.

"People were just more stoked, I think, from the fact that we're there," Bradley explained. "They know we're not going to be back for another six months at least, or a year or some crazy amount of time. Kids act like it's the last show on earth and the only time it's ever going to happen. They have fun. They're wild about having a good time. There's not like trying to fight each other, they're trying to just like get crazy. Not like break s---, but break s--- in the name of good times, not 'I'm an a--hole and I will punch you in the face.'"

"Yeah, I think people are more stoked on music in general there," vocalist Krysta Cameron added. "They're into music as a whole, not like what the people look like in these bands."

While operating any band is hard work, there's always time for a party, and the conditions in Europe were quite accommodating, especially where beverages are concerned. "Seriously, at every show there'd be 700 beers," Bradley said. "I'm not even exaggerating. They just leave like 700 beers, and whatever you drink, you drink. Whatever you don't, the next day someone will. It's totally different. Whereas in America -- any time we talk about this we sound so anti-America or something, but any band you talk to, it's totally different there. They just treat you like you're Slipknot, even if you're not."

Another big factor in the disparity between the two continents' attitudes towards metal music is the amount of public money utilized, which Bradley explained: "A lot of the venues are funded by the city or the country, things like that. None of those shows bombed, but say they have a show that bombs, what do they care? It's not like here if a show bombs the promoter can't pay rent and has to commit suicide because their life is seriously done. They're just like, 'Yeah, we got 500 bucks from the state' ... some countries as a whole support the arts and pay to keep these venues open so kids are off the streets, playing music. It's totally a complete different mindset than America. Like, one million percent."

Iwrestledabearonce will be on perpetual tour all throughout the year -- even returning to Europe -- to support their Century Media full-length, 'It's All Happening'.