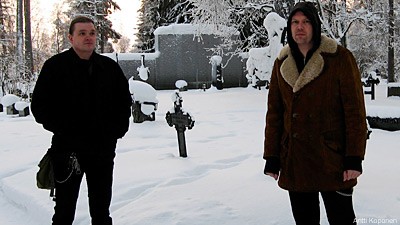 The latest release from Finland's Hooded Menace, 'Never Cross the Dead,' is for lack of a better term ... brutal. Not surprising, considering multi-instrumentalist and vocalist Lasse Pyykko has been putting out brutal underground death metal for years now, whether it be with such acts as Phlegethon, Claws or Vacant Coffin. But it's the old-school guttural death doom of Hooded Menace that has garnered the most attention. So where does Pyykko rank Hooded Menace amongst his vast catalog? Does he consider it his best work?

"In fact I do. I've never been happier with any band that I have been in," Pyykko told Noisecreep. "I also rank my early work with Phlegethon pretty high. As a teenager I worked my ass off for those Phlegethon songs, and I still like them. Especially the ones on the 'Neutral Forest' demo from 1990. It´s just the bad production and crappy performance that totally ruin them. People might have a hard time figuring out how good the song material is because of this lousy production and performance. If you can see beyond that you might be impressed. We were too young and too unaware to record them properly back then. But well, that´s about the past. I'm taking care of not repeating that mistake with Hooded Menace or with any of my newer bands."

While Pyykko's other acts are more rooted in traditional death metal, Hooded Menace take their cues from the doomier side of things a la Cathedral, Black Sabbath and Winter. Combine that with the classic cult horror movies ('Night of the Living Dead,' 'Manhattan Baby,' 'Night of the Seagulls,' 'Tombs of the Blind Dead,' 'Return of the Evil Dead') Hooded Menace base their songs around and Pyykko's blood-gurgling vocals, and the result is pretty terrifying. Speaking of Pyykko's vocals, it can't be easy to 'sing' like that, right?

"I had to find this voice from the bowels of my inner hell!" laughed Pyykko. "It is hard to sing like that and I can tell you I don't really rehearse it. I mainly sing only when recording stuff and every time it is damn hard. For the new album, I basically recorded only one song per day. Well, after a rough start I could pull off two songs in the later sessions. So it was a pain in the ass as always. But hey, no pain no gain! Sometimes you have to suffer for your art."

'Never Cross the Dead' will be available in April from Profound Lore.