Hollywood Undead will bubble up from the underground with their third album Notes From the Underground, which drops on Jan. 8. The band is known for its masks and rap-metal mix, and while that might cause some elitist metal fans to roll their eyes and think, "Stuck in the late '90s/early '00s," such is not the case for Hollywood Undead.

There is a venom in their music and art in their performance. In essence, Hollywood Undead are smarter than you think.

Noisecreep spoke to vocalist Johnny 3 Tears on the eve of the release to find out where the band is at on its ever-important third album; that pesky lawsuit with former member Deuce; and what it was really like to work with Clown from Slipknot on the video for NFTU track, "We Are."

Can you place Notes From the Underground in the context of the career, besides the fact that it's your third record?

Everyone wants to progress. We are no different. We started out heavy and it left us with a lot of options moving forward. That's what's cool about being in Hollywood Undead. We are trying to move forward in the right degree, so we don't alienate anyone. I wanted to do a pure industrial type record, and everyone said we won't get away with that. We still wanted to move forward, but not too fast, since people get pissed and those who like you don't understand why you changed. So we do it in doses. We just try to get better at writing songs. Getting sedentary or satisfied? That's when you get yourself in trouble. Even if you are good, you can always be better.

Hollywood Dead got a dose of some unwanted press thanks to the drama surrounding former singer Deuce, who claims members of the band jumped him. Do you ignore it or is the collective thinking that all press is good press?

It's off my radar. I think about it when someone asks me about it.

[Laughs] In all honesty, we are about progression and moving forward in all aspects of being in a band. It's so five years ago. I hate saying that, since I hate when athletes say that. But it is the truth. Keep your eye on a prize. It's an ongoing lawsuit, and I would love to tell people what actually happened, but I can't, so we are stuck in this situation. He can say whatever he wants, but we can't, since we have to deal with the consequences. You want to either defend yourself or admit guilt. We will divulge information when we can.

We just wanted your take, as much as you were able to give.

It's a pain in the ass. I always have some lawsuit against me!

Pick one song from Notes, and put us there during the writing and recording process.

We have a song call 'Lion.' It's the fourth song, and when I came up with the idea for the song, I had a chorus, so I hit up the producer, went into the studio to lay it down and to get it moving, since I knew we would revisit songs quite a few times, since that's what bands do. We kept moving and making progress, so we stayed up 34 hours. We started it from scratch and finished it in one session, which is tough, since there are a lot of elements. There was no stall. It was written in one fell swoop in a day-and-a-half. We never did it that way before and never want to do it again. I had a four-day hangover after.

Yikes. I can imagine. Do you have any hidden skills or talents?

I can satisfy... no wait! I am a writer. I am working on a screenplay. I hate saying that, since everyone does, but I grew up in L.A., so I can't help it. I am good at motocross and I used to compete. I was a quarterback in high school and can throw a football a mile.

Why are Hollywood Undead still a band people love to hate?

We appreciate the kids who "get" it and enjoy it. Anyone who says they are not bothered by haters is lying. We are all sensitive human beings. If they hate it just to hate, I don't care. But you take it with a grain of salt and appreciate the people who do get it. Some who don't like us but see us live and pay attention and open up, they "get" it eventually and that is also good. We get people who are dragged to our shows by their friends and then they become a fan, so converting people is rewarding. If you take it too seriously, it'll drive you crazy.

Watch 'We Are' Video

Lastly, you've worked with Clown from Slipknot on your 'We Are' video, which makes sense, since you are both highly visual! What was it like for you? Give us some insight to how it really went down.

It's a sideshow trying to get a video done in two days. Directors are directors who want what they want, which often excludes the band. [M.] Shawn [Crahan] has been on the other end of that for years as a member of Slipknot. He has directed, but he understands a band perspective better than most video directors. He knows the level of comfort and the level of input from the band and did not brush us off, like "Whatever, punk." That made the experience fun. I had a good time doing it. He is visual, like you said. His directorial style is allegorical and I was always interested. Everything was groovy from the start. I hope we get to do it again sometime. Directors, they tend to think you're a doofus, like 'You do music, this is my job.' That's not how he was. 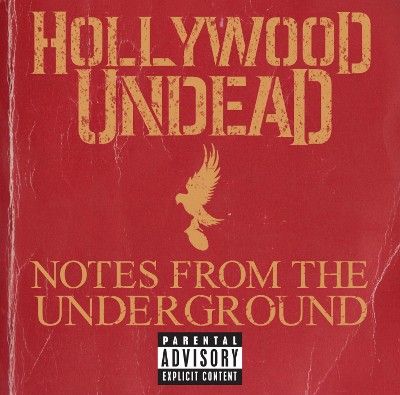 Notes From the Underground will hit stores on Jan. 8.