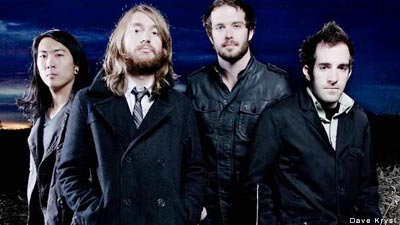 "It's a new year, and we have a lot of new stuff going on for 2010," Haste the Day bassist Mike Murphy told Noisecreep. "We have half of the new record done and we are just waiting for it to stop snowing so we can get to the practice space and finish the writing of the new brutality. This record will have the heaviness of older HTD combined with the musicianship of our newer stuff.

"Of course, there will continue to be singing parts that your cannot get out of your head. We will also be releasing a sick DVD along with the new record. It will have a lot of footage from all over the world along with a bunch of footage of us acting like we're eight years old! I have a feeling that this record may change the hardcore scene, if not the world!"

It's a lofty goal for Haste the Day to want to change their scene, but it's a noble one, at that. One thing is for sure: the record will get your adrenaline pumping, no doubt. Murphy also shared an uplifting note of hope with us and said, "Since we started this band in 2001, each year brings new challenges and with those challenges, new rewards. As the years go on and we get to meet more of our amazing fans and supporters, we remember why we started this band. We just want to remind people that they are valuable and important, they are loved, and they don't need to live in the shadow of their guilt."

See the band on this summer's Warped Tour, as well, which is alt rock' summer camp!