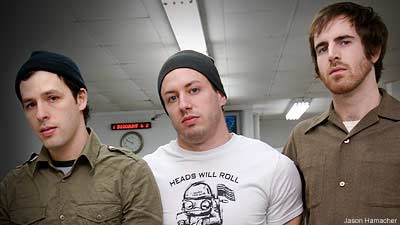 The last few years, Kevin Lyman's Warped Tour has become more metal than your mother's kettle, so to speak. Rather than serve strictly as a platform for punk, ska and emo, Warped has become an all-inclusive affair, featuring bands like Underoath, the Devil Wears Prada, In This Moment and Killswitch Engage. The Warped Tour 2010 lineup will be no different.

The Warped Tour 2010 will feature all kinds of heavy. Most notably, the Dillinger Escape Plan will be on the bill, spreading the word about their forthcoming album, 'Option Paralysis.' Every Time I Die return to this year's lineup, and making their debut on the bill are two of metal's rising stars: Suicide Silence and perhaps the heaviest band to ever grace the Warped stage, Whitechapel, who've just entered Audio Hammer Studios with producer Jason Suecof, presumably to begin work on a record they'll be promoting the hell out of all summer long.

Others acts who've signed on for next year's Warped include: Alesana, Attack Attack!, Bring Me Tthe Horizon, Emmure, Eyes Set to Kill, Haste the Day, In Fear and Faith, Iwrestledabearonce and Parkway Drive. The bill will also include Andrew W.K., Emarosa, Of Mice and Men, Pierce the Veil, Set Your Goals, Sum 41, the Casualties and the Rocket Summer, among others.