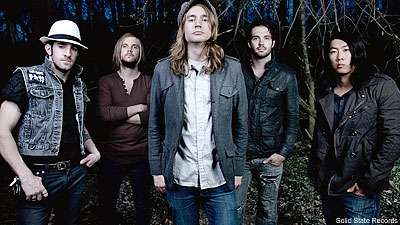 Killer Lyrics: And their blood will spill like water in a fountain for thieves and liars / So bare your teeth / And sharpen your claws / Because we hold the keys

Indianapolis' Haste the Day return with concept album 'Attack of the Wolf King,' their fifth full-length. 'Dogs Like Vultures,' the second track, is one of the more key songs in the album's track list, according to vocalist Stephen Keech. "This song lyrically is one of the more important songs on the record," Keech told Noiseccrep.

"The record is a concept about bloodthirsty wolves hunting down a flock of sheep," Keech explained, "relentlessly pursuing the sheep in order to satisfy their appetites. But what the wolves do not know is that a pride of lions has formed a relationship with the flock of sheep and have vowed to protect them from danger."

The lyrics to 'Dogs' are written from the lions' point of view, where they vow to protect the sheep by destroying the predatory wolves. The battle ensues for the rest of the album's duration.

"Of course this song means a lot to me personally," Leech said, "and I derived a lot of the content from things that have happened in my life but what I really want from this song lyrically and for the record as a whole is for people to relate it to their own lives. It might be saying one thing to me but it might say something much different to you."

Haste the Day are currently on a U.S. tour with MyChildren MyBride and Upon a Burning Body.