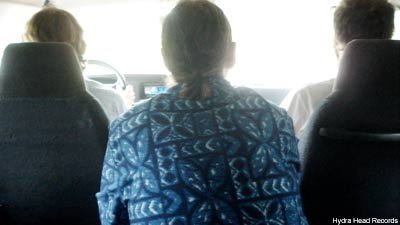 "What's f---ing funny?" Harvey Milk singer and guitarist drones through a nostalgic ooze of drum and riff density on the first track of 'A Small Turn of Human Kindness.' The '90s survivors never pick up the pace from there; it just gets more malicious in the executions as the album plays on, never acting as different songs but rather movements taking Harvey Milk far and away from the bottom of the bottle laughs that were 'Life ... the Best Game In Town.'

"It's a story, which is silly -- I mean the story isn't silly, but I don't know how to pitch it," bassist Stephen Tanner told Noisecreep back in December, when he was in his hometown of Athens, Ga. listening to the final cuts from the band's seventh long player. "You can call it a f---ing musical for all I know," he laughed through the phone line, his chuckle reeking of bathroom jokes and anything-but-serious attitude. That laugh is a trademark of the Harvey Milk live set.

'A Small Turn of Human Kindness' shares a title with a song from the band's first album, but there is no direct connection. "I do think we include a melody from it as a goof," Tanner admitted. Though no insight or absolutes were given on what the story is behind the album itself the knowledge of how and why the album exist is fitting for a band that spent their career confounding people who just seek to figure out how to define the band.

"This is really embarrassing. We're not trying to be smart or something. That whole record, " Tanner explains, "we were on tour in 2008, our longest tour -seven weeks- and this was the dawn of Blackberries and s--- like that and Kyle [Spence, drums] was addicted to his Blackberry so he was constantly reading whatever Joe-schmo was posting about the 'Life ... the Best Game in Town' record and some guy was like, 'Eh, it's OK. I really like their other stuff but it's too easy to listen too. It's not challenging or weird.' So Creston was like, 'F--- that.'"

Tanner cuts through the story detailing that 'A Small Turn of Human Kindness' was written for one fan, an angry fan. "Maybe we'll go back through e-mails and find it and dedicate it to him. It's kind of funny that this is what it's based on: being hung over in a van at [10 AM] and Kyle reads something off some stupid doom rock message board."

The album's groundwork began right there in the van. There was no waiting until they got home. "Creston is like a f---ing music wacko and he bought some manuscript paper and wrote all the music on paper in the van, in two days," Tanner says admitting his involvement was very little in the albums creation. "I came down, Creston wrote all the music down on a board and me and Kyle looked at the board and we played the music and that's what it is."

What the disgruntled fan wanted was a turn back to the 'Courtesy And Good Will Toward Men' album. Many consider that release to be the trio's pinnacle of sound and deepness. Tanner doesn't get that. And he was there. "What people don't get is there is no f---ing thought put into it at all. It was just f---- around," he said.

Tanner admitted he's with the fan on the message board in being disappointed with their last album, despite its praise, saying "To be personally honest it's not one of my favorites. I like it. It came out better than it should have because I kind of forced the issue. Creston did not want to make a record; he wanted to practice and write songs."

Tanner felt constrained living in New York far away from the band so writing was easier than practicing. "I demoed songs. They demoed songs and I kind of went down there and f---ed around until we got something that we could live with."

With '...Kindness' being a brother to '...Goodwill' there is no way any of the glory of 'Special Wishes' could be added to the album. According to Tanner that album holds their best songs and is Spence's favorite. And despite the rough sounds of the record the band still has no plans to fix it up and give it another release. "That was recorded with a f---ing junky in Brooklyn who did the worst job, just appalling," Tanner comments. "What was on the tape was unlistenable. We gave it to Kyle and he made it good."

'A Small Turn of Human Kindness' comes out May 18 on Hydra Head.