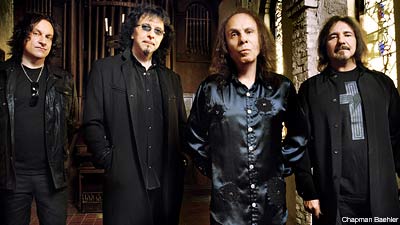 To Geezer Butler, the legendary bassist from Black Sabbath, the formation of the band Heaven & Hell was unplanned. So he and his band members -- singer Ronnie James Dio, guitarist Tony Iommi and drummer Vinny Appice -- are taking their career in stride, including the follow-up to 2009's 'The Devil You Know.'

"We've been on tour since the album came out," Butler explained to Noisecreep. "We haven't had any chance whatsoever to think about a new album. We're not planning anything though. This album was a surprise. This whole band was a surprise -- us getting together again. None of us really planned it. It's an off-the-cuff thing to do in the first place, like two to three years ago when we decided to do it. So we leave everything unplanned so as to take one thing at a time -- especially with our history of breaking up every couple years."

Heaven & Hell's four members recorded and toured together as Black Sabbath from 1980-1982 and 1991-1992. The band decided to pen 'The Devil You Know' after the series of comeback gigs as Heaven & Hell were so successful.

"We finished the first tour together -- we were on tour for nine months -- and we didn't have any albums planned or anything," Butler said via telephone from Vancouver, B.C. "We came to the end of that tour after nine months. It was so successful, more successful than we ever dreamed it would be, that we thought it would be a shame to just leave it at that. We were all getting on really well. Everything seemed to be going well."

Then Dio suggested that Heaven & Hell try to put an album together. They began writing for 'The Devil You Know' last year, first in England at Iommi's home studio, and later in Los Angeles at Dio's studio. The band hit the Rockfield Studios in Wales last winter, and the result is the 10-song epic.

"We all went away for three or four months," Butler said of the recording process for 'The Devil You Know.' "We all brought different stuff. We got back together after three to four months and shared what we had written in our free time and went from there, really. We put all the stuff together that we liked. We recorded the demos into Ronnie's studio and then we finished recording in Wales."

On April 28, the lineup of Heaven & Hell released 'The Devil You Know,' its first album in 17 years. The band, currently on tour, plans to mix in several tracks from the album into its set of Dio-era Black Sabbath classics.

"We're gonna do three tracks off the new album," Butler said. "We're also going to do stuff from the other three albums. It's fun. That's why we keep doing it."