Tomorrow (Feb. 5), Welsh post-hardcore warriors Funeral for a Friend are hitting record stores again with Conduit, the follow up album to 2011's Welcome Home Armageddon. There have been some changes afoot, such as the addition of new drummer Pat Lundy, who anchors the band's sound while seated behind the kit.

According to vocalist Matthew Davies-Kreye, Lundy has infused the band with new passion and energy, revitalizing the members, since a decade in a band certainly allows one to become jaded.

Noisecreep spoke to Davies-Kreye about hopscotching labels, how Lundy has helped retooled the band's mindset and what he learned about his bandmates while touring mainland Europe in an AC-free bus.

Stream Conduit in Its Entirety

Funeral for a Friend have been several labels through the years, from Ferret to Atlantic to The End. Is that a headache? Did that slow momentum for the band?

No. I never put much thought into it, really. When we first started out, we had a label like Ferret that wanted to put it out in the States. It was a mindfuck that a label that we admired and respected wanted to put us out. Here we are, 10 years later, and we want to go with the labels that believe in the record and the band. Every band's dream is to have a label that does that. I don't know about momentum, though. We haven't been Stateside in three years, so maybe we can gain some in the States now.

You've been out of market for a while, but how about the U.K.? Are you guys still raging over there?

We went from Atlantic to doing a record by ourselves and then realizing that five guys with opposing opinions doesn't work out to be the best when it comes to business practices, so we found an indie label that distilled all those beliefs into one work ethic for two records.

That's no fun when you have differing opinions and you have a job to do in the band! Let someone else worry about the periphery!

The ways bands operate these days, it's part of the DNA to control things and either work with a label or self-release. From where we started, it was always a massive part of the hardcore scene. We, at the time, decided to do it on our own, and it was a bit of struggle. When we did it ourselves a couple years ago, it was a time when everyone in the band had different ideas on how to do things. So it was a headache. The current lineup is like a massive Advil to the head. It's a welcome perspective.

This is your first album with new drummer Pat Lundy. How is the "newness?" Is it better for you, and we don't mean that as a disrespect to your former drummer!

It's the enthusiasm! He is 10 years my junior. He's wide-eyed and has that optimism. After 10 years in a band, where the potential for being jaded is quite high and takes the sheen off, his energy puts the awesomeness of what it is to make music back in front of us. His playing? He is a machine! He is the best I've ever played with. No disrespect to our former drummer. We are listening to hardcore records from our teenage years, and that's the type of drumming that was on my bucket list, and he has come along and has owned the new material as well as adding his own interpretation on existing stuff. Everything has a newness.

What records are you listening to?

Start Today by Gorilla Biscuits, Hello Bastards by Lifetime, and even like Snapcase, Earth Crisis, Strife, the '90s bands, Brother's Keeper, and other American punk rock and hardcore. That dominates my record collection and my listening taste. I never stopped being hardcore kid. That rubs off in the record and the band, reconnecting with the reasons I wanted to be in a band in the first place. It's roundabout, but this record reflects that.

Pick one song, and share a writing or recording story! Put us in the middle of the Funeral for a Friend writing process.

The true, honest background to "The Distance," which is a strange lyrical for me to approach, since usually, when I sit down and write lyrics, a lot of it is train of though, with a laptop or a piece of paper and I jot things down and a theme develops. When I wrote to the original music demo that Kris [Coombs-Roberts], our guitarist, did, the only thing that came out of my head was a tour we spent across mainland Europe.

We were invited to open for Linkin Park, which was weird as it is. We were in this van with no air conditioning and three seats facing each other, with a table in the middle. You just sit there. No fucking air conditioning, driving around in solid mainland Europe, where unlike in the U.K., they get the summer. The only way to get air into this van was with a tiny, and I mean no bigger than my hand, slit in the window that you can open and close. We spent the tour like this. I saw intimate details in my guys in the band than I ever cared to share or thought I would share. When listening to this song, I put down lyrical content about that spectacle, of five dudes, in the back of a van, in our underwear, scratching our asses off, on this tour. I am not sure why I thought that would make a good song or a good lyric.

When other people reading it, they can't tell. So it's a sign that I am a brilliant lyricist so people can reinterpret [laughs]. It's not meant to transport you to a van with five sweaty dudes in their underwear, but it's close. I wanted to capture that feeling; the video suggests what it's like, and pays homage to the nomadic, forced to band together nature of what we do. You have to be a unit, no matter what, in your undies or freezing cold with no heat or if someone is drunk and throwing up all over the place or someone has farted. It's meant to capture that in a beautiful and respectful way, not a bitching way.

So what's the most insane thing you learned about your bandmates?

Kris is an extremely hairy individual. Let me say this for anyone interested in comparing appendages! He is pretty substantial. We sat in our boxers, eight hours a day. He made some of us feel a little inadequate. There is a reason why we call him the Kellogg's Corn Snake.

What are some of your non-music passions or hobbies or talents?

I'm a passionate photographer and a dedicated vegan and I have a collection of cats and rabbits: Five cats and two rabbits. I am a crazy cat dude. My wife and I are animal people, and we're both vegans! Our home is a shed with five cats who grace us with presence and allow us access to them, and there are out two rabbits who are free to roam. I never have to mow the lawn. They graze. They are hardcore grazers. I am thankful for it. I have hay fever and they do me a service.

We'd like to ask you your thoughts on the Ian Watkins case, given then he is also in a band from Wales, and you're at least geographically close to the situation.

It is the same for everyone in a band. No one had any inkling whatsoever of anything like that, having to do with him. It goes to show that you never can tell. We've toured with Lostprophets. We've been in the same places and hung out and never in a million years would I think Ian would be that way. I think it's a massive shock to his fellow bandmates. You spend that kind of time together, but you never really know anybody.

You wanna think that someone is innocent until proven guilty but there are so many things that have come out that it is hard to ignore, as well. You don't know what to think so you sit on the fence and see what happens. We haven't got the closeness to Lostprophets that other bands do, but it still came as complete shock. 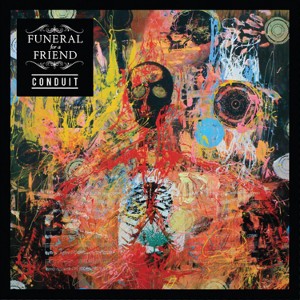 Conduit will hit stores tomorrow (Feb. 5) via The End Records and can be ordered at this link! Listen to the entire album today at the AOL Listening Party.