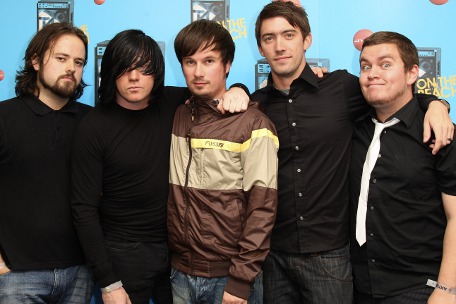 Longtime Funeral for a Friend drummer Ryan Richards has quit the band, choosing to focus on his family instead of the band. It's an amicable split, because, hey, life happens and things change. People grow up and move on.

Richards (dude with the crazy eyes in the photo above) manned the kit for the Welsh rock band for a decade. His last album with the band was 2011's Welcome Home Armageddon.

FFAF didn't waste any time filling the open sticks handler position, as Rise to Remain drummer Pat Lundy has already been named as the replacement for Richards.

Richards offered the following statement on the matter:

"After 10 wonderful, enriching, emotional and fascinating years being a part of Funeral for a Friend - I've decided to hang up my drum sticks. I've always put music first in my life - but the time has come now for my family to take the top spot, after patiently waiting and supporting me for the last 10 years and more."

Richards also offered his full support of Lundy as his replacement. He said:

"I'm stoked to have my good friend Pat Lundy step into my vacant drumstool. There's not a better drummer than Pat for the job." What a class act that Ryan Richards is.

FFAF frontman Matthew Davies-Kreye offered the band's sentiments on Richards' exit, saying, "We give Ryan our full support and wish him the best in his future endeavors."

Lundy will make his FFAF debut at the Slam Dunk Festival in the U.K., which takes place this weekend.

Congrats to Lundy on the new gig and best of luck to Ryan Richards in post-FFAF life.

Filed Under: Funeral for a Friend, FuneralForAFriend
Categories: News
Comments
Leave A Comment
Back To Top