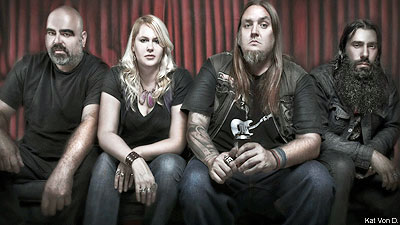 No one can accuse Fireball Ministry of being lightweights. The stoner rock outfit knows what they bring to the party: thick riffs to down some beers to. For 'Butcher, Faker, Policy Maker,' the first video off of their self-titled album, the band returned to director Brandon Trost, who's put to film 'Sundown' off the groups previous effort 'Their Rock Is Not Our Rock."

Frontman Rev. James A. Rota II told Noisecreep the initial idea was to make a performance video, but in a 'Raging Bull' style. "We wanted to do a simple performance video for several reasons," explained Trost -- who was also the director of photography on 'Halloween 2.' "First off we actually love being able to just watch a band play. We didn't feel like we needed a narrative to assist the song, instead we chose to make the space that they play in feel as interesting as possible with as many camera angles as possible. We shot it with three cameras simultaneously and knew that the video would really come alive in the edit. The other reason we chose to do a simple performance vid was merely because we couldn't afford anything else!"


With assistance from his brother Jason and a crew of five paid with a lunch (that was the budget) the Los Angeles band's intensity was captured in a Trost family garage.

"I believe that the strength of Fireball Ministry resides completely in their unwillingness to conform to homogenized pop music," says Trost. "These guys are nothing but rock 'n' roll and always have been. That's what we want to convey with our video." We here at Noisecreep couldn't be more proud to premiere this video.

Trost admitted one of his favorite moments that afternoon took place after the cameras were packed up. "I asked the band if they wouldn't mind playing a song for us. A live song, since they had their gear all set up and everything." The band was shocked at the request. They had been playing the same song over and over for the afternoon, but Fireball Ministry always delivers, this time with 'King' from 'The Second Great Awakening.'

"It was an awe-inspiring moment to stand there, in our father's garage, with Fireball playing a personal show for an audience of five people, all going nuts for it. We've always been huge fans and we'll never forget it. That one moment made working on a video for free more than worthwhile. That's the great thing about Fireball Ministry ... no matter what the venue, they always play the show as if it's a concert."