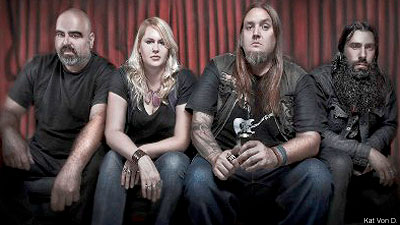 It's been a tough five years for Fireball Ministry vocalist/guitarist Rev. James A. Rota II. But he's very excited that 'Fireball Ministry,' their fourth album, is slated for release March 16. "It's been a while," Rota told Noisecreep with a chuckle. "It's been five years. We are definitely very excited. I had some personal things happen. I lost my mom, and she was sick for a while. That really kind of held us back. Right after that, we weren't really up for doing the Fireball stuff the same way."

"I tried to step back from the whole thing and basically decided to do a record with a bunch of friends of mine called the Company Band with Neil, Jess, Dave and Brad," he said. "That experience really just showed me it was easy to put a record out these days without having to deal with all the label stuff we had dealt with in the past. That same old story, you put out a record, and it never seems that anybody gives it as much attention as it needs. I know that everybody probably says that. The difference between now and then is now you can actually put it out and give it as much attention as you want yourself."

For 'Fireball Ministry,' the band is following the same model the Company Band did when they released 2009's self-titled album. Fireball Ministry are releasing the record, produced by Andrew Alekel (Queens of the Stone Age, Foo Fighters) on their own, with the help of Paula Hogan at Restricted Release.

"She is helping us put the physical out and get it out there," Rota said. "It'll be available online, too. I guess over the break, I was doing my homework. I think that nowadays, it's totally an open market out there in the world. More opportunities come up for bands to be able to put out music like this, be it iTunes or whatever's next. It puts everything into your own hands, if you want it to be. I can't think of anything greater."

Recording the album without the aid of a proper record label made the production process less stressful, Rota said. "On top of just the approach to how we put it out, to the approach to the songwriting, to the approach to everything, it was all totally different this time and much more enjoyable," said Rota, an avid motorcyclist. "There was no pressure. We weren't worrying about the things that we used to worry about.

"There was no one there picking the singles or [telling you] what to do with your video, or pushing you to go on tours with bands that you don't think you fit with -- just the things that labels will do. A label's just a bank that tells you what to do with your money. It's like a bank that loans you money but then makes you do whatever you think is the best thing for you to do, even if you don't agree. It's much nicer if it's your money and you're calling all the shots."

Fireball Ministry, who will perform at this year's SXSW festival, opted to go with a self-titled album -- something usually reserved for a debut release -- because the group wanted the artwork to speak for itself.

"To be honest, when the person came up with the artwork, the artwork kind of stood on its own, so much that we didn't want to lead anybody with any kind of album title," Rota said. "The artwork is a symbol of a phoenix on the cover of the record. We wanted that to be the thing that spoke to people. Also Sabbath's fourth record is their self-titled record. Well, maybe not. That was their first album. I guess we couldn't call it [volume four], so we just made it self-titled."